Saturday afternoon saw me loading up the Cortina estate with tools and spares ready for the long drive up to Stratford Upon Avon, Warwickshire. However, by Saturday evening, I had changed my mind and swapped everything over into the Cortina saloon instead. The saloon has a five speed gearbox, plus a 1600 GT engine, so would be more suited to the six hours or so of motorway driving. I didn't feel that the constant hammering of the estates 1500 engine and four speed gearbox would do the car any good.

So, Sunday morning I was awake at 5.20am and after a few cups of coffee, set out on my three hour, 150 mile journey. Filling the car with petrol was only £33 (small tanks on these cars) and the journey began in bright sunshine. I was making good time, but then the overhead gantry signs on the M40 were stating that the A46 was closed at junction 15. Bugger! This was the way I was planning to go. So instead, I turned off at Gaydon at Junction 12 and picked up a couple of lovely B roads before heading north on the A422 to Stratford.

I arrived at Stratford Racecourse at 9am and was parked in the designated area for the 1500 De Luxe models. (Which is what my car is). Coffee was the next thing on the agenda and I enjoyed drinking it in the sunshine whilst watching other cars arrive. 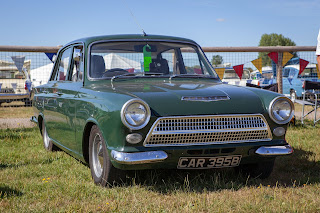 More and more cars were arriving and the club had also invited the Anglia 105E club and also the Cortina Mk2 Owners Club, so there was plenty to look at.

There were also traders selling parts, plus club members had brought bits and pieces along to sell as well. It was a fantastic day and was very well organised. The quality of some of the cars was outstanding and some of the engineering that had gone into the modified cars was very clever indeed. I also met some great people and also got some very good technical advice for queries I had with my car.

Around 2.15pm I was feeling quite jaded and very hot, so decided to make tracks home. I still had a three hour drive in front of me. (and that's only if the dreaded M25 was clear) Luckily, the motorways weren't too bad and I arrived home around 5.15pm. It had been a great day and my car hadn't missed a beat. It's got the makings of a good long distance cruiser similar to my Triumph, so I'm really pleased with that. I've still got a few 'previous owner' bodges to work through yet though, so work will continue. For now though, I'm pleased with how she runs and drives. The final car count of Mark 1 Cortina's in attendance was 83. A fantastic turn out. 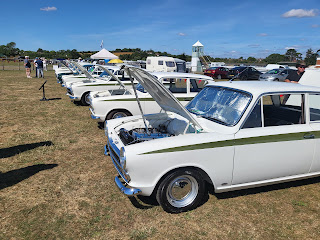 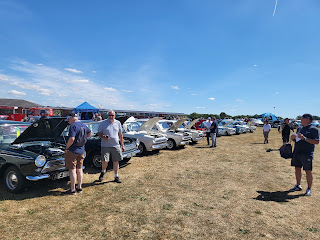 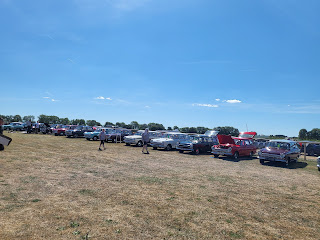