With chief clown Johnson finally easing restrictions and letting people having their lives back, a Classic car breakfast meet had been organised for April the 18th at the Battlesbridge Antiques Centre in Essex. Apart from the occasional drive to work on the Fridays the Triumphs haven't see any action at all, so it was good to get out and meet old and new friends. 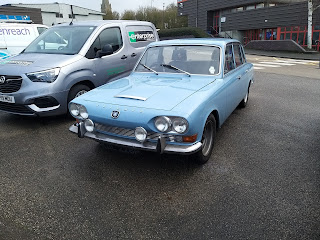 Luckily, the 18th was a beautiful day with no rain threats, so Gertie2 was the car of choice for the day. (The Pi is awaiting workshop space to have some welding done.) I met fellow Triumph owner and good friend Gavin in a local pub car park so that we could drive in together.

Once in the showground we met up with other Triumph enthusiasts Ivor, Anthony and Peter. The guy who works in local car shop was also there with a Vauxhall Viva that he had dragged out of a back garden only five doors away from where I live. A very nice gentleman took a shine to my car as he had bought one from nearly new in the sixties and in the same colour. He and his wife used to go everywhere in it including holidays. He asked if he could sit in it to bring back back memories to which I duly obliged.

It was a good turn out although a bit too much modern stuff for me. (Anyone who has a Porsche, Ferrari or Yank thinks they are classic cars!) It was a good day though and nice to finally get out again. 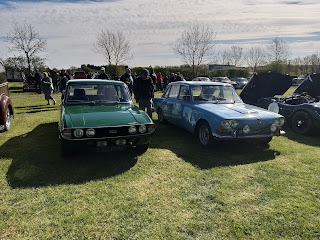 Posted by RadSpeed Racing at Friday, April 30, 2021 No comments: