I'd said to a mate of mine on the phone on Friday night that I was fed up with working on cars and was going to have some time away from them and just do nothing all weekend! So why did Saturday morning begin with me laying underneath the Cortina saloon. (There's a surprise! I think I've been under this bloody thing more than I've sat in it!)

Anyway, with a powerful torch I managed to find where the leak was coming from. It was, as I feared coming from the front of the gearbox which meant that the gearbox would have to come out. There's no time like the present, and within two hours, the gearbox was out and on the floor. (So much for doing nothing all weekend!)

Once more, I discovered more 'previous owner' bodges such as different size bolts in the bellhousing and the propshaft seems a bit short to me as well, but I will have to speak to Ford specialists about this. It could be normal. 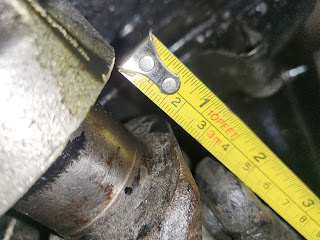 After removing the gearbox and the bellhousing I've discovered the source of the leak and will now set about purchasing a seal and gasket kit. Hopefully I should be able to get these this week and re-fit the gearbox next weekend. I also found the tiny breather hole in the top casing blocked as well which was what probably caused the seal the blow. (Internal pressure)

Once this is done I'll then make a decision whether I take this one or the estate to the Cortina Mk1 Owners Club national day in August. I'm hoping to take the saloon as the five speed gearbox makes it a lot easier on the motorways, but we'll see. I know one thing though. I found removing the gearbox on this Cortina a lot bloody easier than on a Triumph! Lots more room in the engine bay and no need to remove the exhaust either! 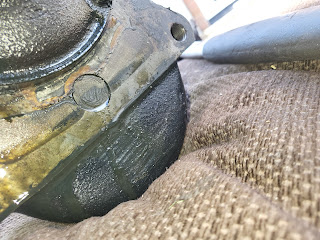 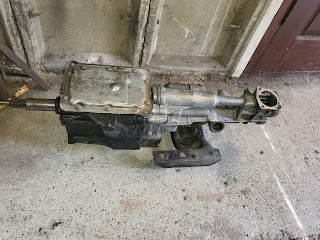 Friday morning involved a very early start for me, leaving home around 5.45am. Todays mission was to sort out the dreadful electrics on the Cortina saloon. Ever since I've had this car I've discovered various things not working, disconnected or just in a general mess!

Good friend Colin Wake is a bit of a dab hand with electrics, so he was tasked with having a look and trying to solve. A list of issues included: Dashboard lights, Ammeter, temperature gauge all not working and rewiring the clock which had been wired to an ignition live so that it stops when you turn the engine off!

I had a good run up the A12 and arrived at Colin's around 7am. The coffee was already on and after a brief chat we got started on the car. We managed to find some horrific bodges that were just a fire waiting to happen. 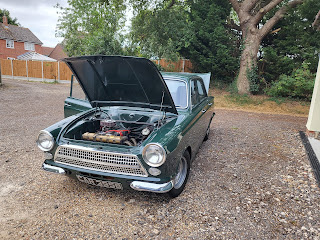 The worst bodge was where the ammeter had been inserted into the wiring. This was just downright dangerous. Slowly but surely Colin worked his way through the car and soldered all joints and made good all the poor wiring. We managed to get done by early afternoon and I had another good run back, although I had to go to work. On finishing work that night I discovered a small patch of oil underneath the car which smelt like gearbox oil. I had spotted this the week before but just put it down to where I had overfilled the steering box. (Which also uses gear oil) The car was driven straight into the garage once home where investigations will begin to find where the leak is. 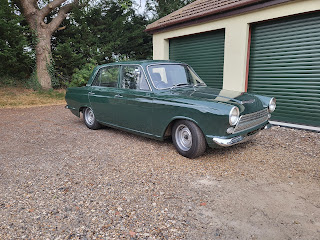 Sunday 17th July. A day at the seaside!

Every third Sunday of the month the Southend district and classic car club have a 'Classics on the beach' meeting. I had no plans for the day and neither did my mate Andy, so we decided to give it a go and see what it was like.

Andy came to my house first and we then took the back roads to Southend. (Traffic can be a nightmare going to Southend when the sun is shining!) After a trouble free run we arrived at the parking area where I was parked right at the top of the stairs opposite the amusement arcades. 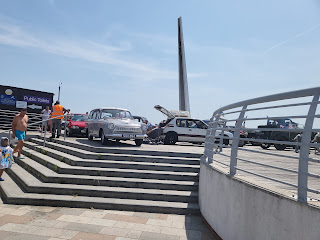 Andy had brought along his Austin A30 and what with him bringing his dog as well I couldn't resist making a comparison to Wallace and Gromit. 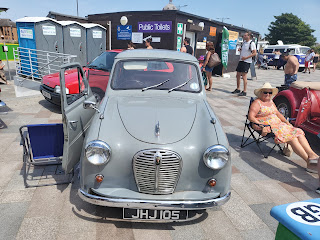 It was a beautiful day and the sunshine was glorious. A lunch of Scampi and chips was very welcome and followed by a lovely pint of cool Guinness. Around 4pm everyone was heading home, so we did the same and again avoided the main traffic flow and came home through Shoeburyness and then Rochford. It had been a quality day out, albeit very hot!

I had taken the estate to work on the Friday before the show and to my dismay had lost a hub cap on the way home. I didn't want to take the car to the show minus one hub cap, so I borrowed one from the saloon. I then thought the saloon didn't look right with a hub cap missing as well, so I took them all off. Luckily, you can still buy them brand new, so I have ordered one as a replacement. In the meantime the saloon will just have to look like this! 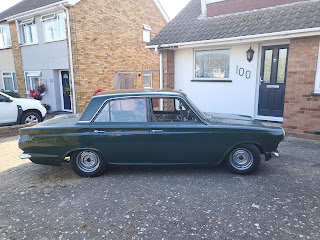 Posted by RadSpeed Racing at Wednesday, July 20, 2022 No comments:

Sunday morning started early with a trip to the cafe to meet good friend Dave Maton. After a rather splendid breakfast we returned to my house where Dave was going to have a look at the wiring in my Cortina Mk1 saloon.

Soon after acquiring the car I discovered that the wiring was quite a mess and also a lot of things had been disconnected, or just wasn't working (Cigarette lighter, temperature gauge, dashboard lights, etc) So Dave got stuck into the wiring while I attended to other jobs. 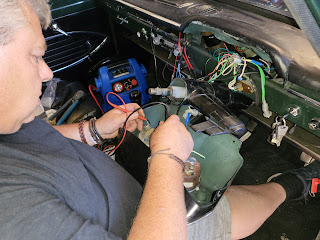 The wiring was a real mess and for some reason whenever we tried to get the panel lights working, the rev counter would spin round and back again. (which obviously it shouldn't do) After  trying several different fixes, no matter what we did, we couldn't figure it out. So, we called it a day and had to leave it for another time. I think I need to find a good auto electrician who has old car experience. The day wasn't a total loss though because Dave is good company and we don't often get time to spend together, so we managed to have a good catch up and a laugh as well.

Posted by RadSpeed Racing at Wednesday, July 20, 2022 No comments:

After giving the Cortina estate a good check over I found that both rear wheel cylinders were leaking and the indicators weren't performing as they should.

After waiting longer than I should have done for parts to arrive I was finally able to get the rear brakes sorted (with help from good friend Gavin) and after a few false starts also managed to rectify the indicators.

With all outstanding jobs completed a test drive was the order of the day, so a run out to Little Easton Manor near Great Dunmow was arranged. My mate Andy was also going in his Bentley, so we met at Chelmsford and drove up together. My little 1500cc engine was no match for his 6.7 litre monster, but we stuck together had a good run in the sunshine.

The venue was beautiful and we had a really nice chilled day. The estate ran well and it certainly got a lot of attention. I think it's the originality of it that attracts people and the front bench seat, column change gearbox and umbrella handbrake seem to be a talking point with a lot of people.

It's a great car and I'm very pleased I bought it. I'm looking forward to going to more shows in it. 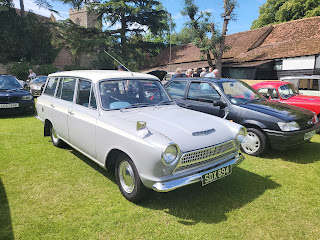 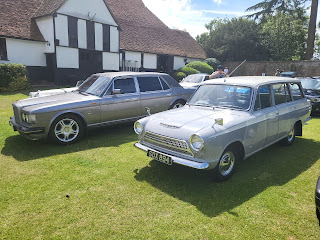 Due to a few charging issues with the alternator, the Cortina saloon hadn't been anywhere lately. I had also been making a list of other things I wasn't happy with since I'd bought the car. The windscreen washers weren't working, so these were repaired, but I couldn't really tackle the other jobs until the garage was vacant. I also decided to 'de-sticker' it and get in back to its original Goodwood Green look.

With the car now driveable and the weather being good, I decided to take it to work. It ran very well and I really enjoyed the drive.  The Sierra five speed gearbox lets it cruise easily at 70mph without the engine feeling stressed or rushed. I need to get the remaining jobs done so I can use this car more, because it great to drive! 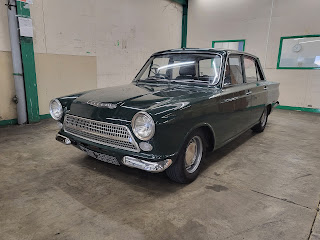