Due to the lack of car events this year, a few of us decided to organise our own weekend overnight drive to try and get back into the habit of things and also to give the cars a good shakedown before this year’s RBRR. The plan was to re-trace last Octobers South Coast run, which we did with a few alterations. Unfortunately my intended car (Gertie2) decided to drop oil pressure a few weeks back, so my Mk1 Pi was called into action.

Richard Warr arrived at my house on the Friday morning and we wasted no time in carrying out some outstanding jobs on his car. The rear springs were changed first of all then the fitting of a 16 pre-set 123 distributor was attended to. We also moved the distributor drive cog as well as this hadn’t been fitted correctly.

Dave Harvey arrived while we were fitting the distributor and after a few cups of tea and a chat it was now late afternoon, so we headed out for a few beers and a Chinese.

Saturday morning saw a bit more fine tuning to the cars and just generally checking them over and loading up the tools and spares. Richards’s co-driver Colin Wake arrived at around 1.30pm and by 3pm we were tucking into a Toby Carvery with the hope that it would see us through until Sunday morning.

After enjoying a good meal and filling up with petrol we set out for our first stop at Joss bay in . This is the most Easterly point in the South of England and is also quite a nice setting with a beautiful beach. 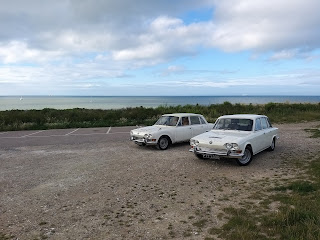 After a quick photoshoot, we then set off for our next stop at Dungeness lighthouse. Things were already better than last October as it was still daylight and it was quite a bit warmer as well. The plan here was to make a cuppa with Richard’s portable stove, but it was at this point that we realised that we had forgotten to pack the water for the kettle. And the milk. And the spoons. And the cups! Hopeless! 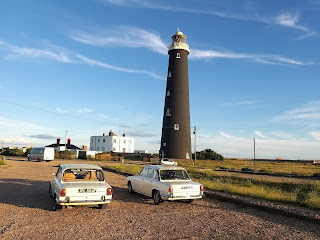 Undeterred we motored on and purchased milk and water at a fuel stop at Bexhill in . Our next port of call was Brighton Sea Front which turned out to be really busy with revellers, so we only stopped for a quick pic, and then carried onto Rownham’s Services on the M27 near . This time we did stop and get the cooker out and Richard made a great cuppa and Colin and Dave supplied the biscuits.

By now we were in the small hours, so we pressed on through Hampshire and and made our way to our next stop at Oakhampton in . (Also a checkpoint on the RBRR)  I hadn’t put any fuel in since Bexhill, so my car took on a wallet damaging £74.26 in petrol. Ouch!

More coffee and snacks followed and we also had a debate regarding the apparent forthcoming atrocious rain storms in the South west and whether (Pardon the pun) to abandon the trip or take a chance and battle on with it. We decided to carry on with it. On arrival in Cornwall, the rain started in earnest and seemed to be here for the day. (Although it did finally stop early afternoon) 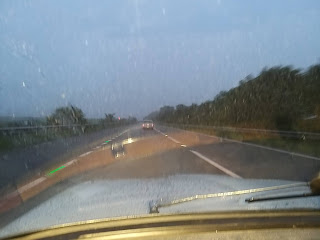 We decided to skip the next stopping point at Lands’ End (Because we’ve all been there several times before and will be going there in October anyway) and head to Lizard Point, the most southerly place in . It was while we were here that the rain really started hammering down, so we headed for our breakfast stop at . The rain was still hammering down as we paid our £2.00 toll and crossed from Cornwall into Devon via the famous Tamar bridge at Saltash, but at this point, we were still making good time. 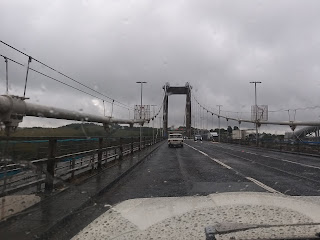 The rain didn’t stop while we were enjoying breakfast as we’d hoped it would, so we cracked on despite the weather conditions, but shortly after leaving had a few minor issues. Richards car hit a rather large puddle (more like a lake!) and just suddenly cut out, (He soon got it started again though) but both cars were suffering exhaust noise and vibration problems. Both cars have Chris Witor stainless steel systems on them which can be prone to distorting and moving when suddenly having excessive cold water splashed onto them from massive puddles. This is because the oversize exhausts sit very close to the propshaft and when they distort they come into contact with it.

Luckily we managed to find a hand car wash that was closed, but more importantly had a canopy. (For shelter from the now torrential rain that was pouring down) Richard had a small trolley jack, so with a bit of levering with a pry bar, both exhausts were ‘adjusted’ so that they were clear of the propshaft. By now it was around 10.30am and we still had many miles to do and the weather was probably the worst I’ve experienced since……..well, since we did this same run last October actually!

The traffic was awful as well and we only had one more coffee stop not far from . Our journey across the A303 was mostly stop, start, stop, start, but we did have a good run up the M3 before losing a further 40 minutes to an accident near the M25.

We finally pulled up outside my house at 18.40 that evening. If you take away the stops, it had a taken us over EIGHT HOURS to get home from . A run that should normally take about four and a half. We then went out for an Indian meal and some alcohol to celebrate our successful run. 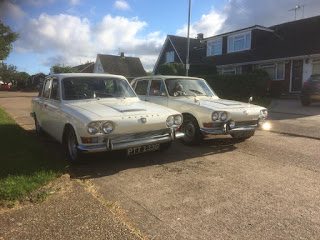 Despite the awful weather and traffic on the Sunday, it has still been a great weekend and one that I wouldn’t have missed for the world. Both cars had covered the 889 miles really well and passed through the counties of Essex, Kent, East Sussex, West Sussex, Hampshire, Somerset, Devon, Cornwall and Surrey. Annoyingly, it was only really the weather that caused the mechanical issues we had.

Posted by RadSpeed Racing at Wednesday, July 07, 2021 No comments: