Further stripping of the Pi engine revealed more damage than I had hoped. I removed all of the pistons and when I removed the cap from number three piston, the bearing just fell out. It was also badly scratched and grooved. Both halves of the bearing were a very loose fit and wouldn't push back into their locations. This would indicate that at some stage the bearing has spun on the journal and caused excessive damage. 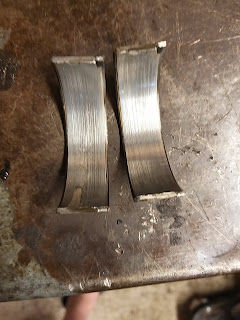 The remainder of the engine was stripped and the crankshaft was removed. It looks like the main bearing journals on the crankshaft are ok, so they may get away with just a polish, but we'll have to see what the engineering firm says.
The cam sprocket and rear crankshaft seal housing both had a fair amount of gungy oil on them, so it looks like both oil seals had failed as well. The camshaft does look to be in good condition though, so hopefully this can be used again. (I haven't had a chance to clean it or inspect it fully yet though.)
So, the pistons are now on the work bench and the engine block itself is pretty much stripped for cleaning. 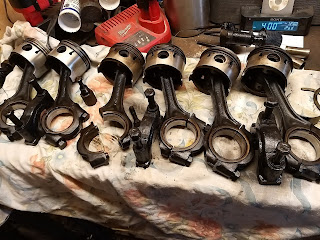 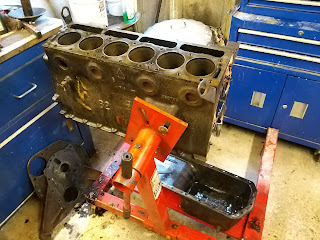 Friday morning 23rd  October, I met Colin Wake for breakfast to swap some other bits over, then took the crankshaft over to Thurston Engineering at Ongar for them to carry out the work. They are an established engineering company that have been operating for many, many years and have a very good reputation.
It was a nice sunny day, so I decided to take Gertie2 for a drive over there. The crank is now in their possession so I now just have to wait for their report on what work needs doing. 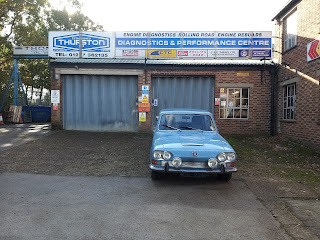 New engine to rebuild for the Pi.

Ever since I've owned my Mk1 Pi, it hasn't had the correct engine fitted. This has always irked me somewhat and I've always kept an eye out for the right one. My Pi is currently fitted with a Mk2 Pi engine which starts with an MG prefix. The correct engine for my car should start with a CR prefix.

Whilst browsing on ebay last week I spotted a CR engine which would hopefully be ideal. Luckily a friend of mine in Derby went to nearby Nottingham where the engine was situated and looked at it for me, confirmed it would be good and collected it for me. Even more luckily for me he was coming down to mine at the weekend anyway and brought it with him.

I had some free time today so I started to partially strip it down to give me an idea of what I was up against and what parts I may possibly need. 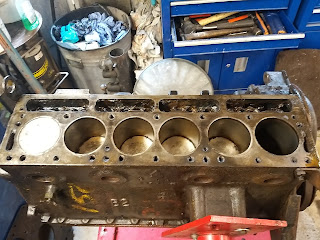 Removal of a big end bearing cap and a main bearing cap showed hardly any wear on the bearings and crank at all and the 308778 original Stanpart camshaft looked good as well. The oil pump filter also looked clean , so this engine has been looked after at some point. I say some point because when the engine arrived newspaper had been stuffed into the bores to keep them clean and extraction of the newspaper showed it to be 1983! 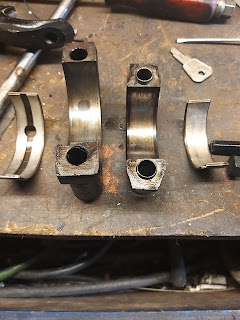 All was looking good, but the cleaning of the top of the pistons gave the biggest surprise. At some point in its life the block has been bored out and had plus 60 thou pistons fitted. This will increase the CC (Cubic Centimetres) from 2498cc to 2601cc. (or in other words 2.5 litre to 2.6 litre.) 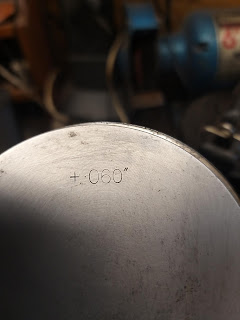 At present it looks like this engine could just be fitted in the car and used as is. However, I will still be fitting a new set of big end bearings, main bearings, piston rings and a new oil pump, to hopefully get some longevity out of it.
The funny thing is, the other engine that I have fitted in my Blue Mk1 has also been bored out to plus 60 thou as well, so I'll be running two Mk1 saloons both with 2.6 litre engines.

With the Postponement of the 2020 Round Britain Reliability Rally and the fact that we were unable to cancel the hotel bookings we had already made, a few of us decided to plan our own weekend away and end up at the Novotel, Knebworth on the Sunday night anyway.
So, after a few weeks looking at routes and times etc. we decided on a trip out to the most Easterly point in Kent (Joss Bay) then all the way along the South Coast to Lands End.
Fellow drivers Richard Warr and David Harvey arrived at my place on Friday (Needless to say Beer and Curry was on the agenda Friday night) and Dave Maton arrived on Saturday afternoon. A good dinner was had at a Toby Carvery in Wickford and after filling up with fuel at Basildon, the two Mk1 Triumph saloons set off  at 4.30pm for the first check point in Kent
The weather forecast that we had looked at with growing horror on the Saturday morning was turning out to be fairly accurate and not long after starting the journey the rain started. It had stopped by the time we reached Joss Bay in Broadstairs and we were lucky enough to get a few minutes out of the car and take  a few photos before the dark closed in. 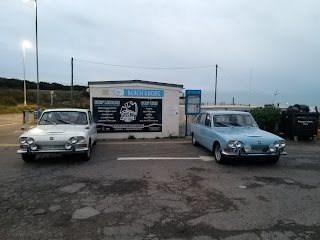 Our next stop was the Old Lighthouse at Dungeness and by the time we arrived here it was totally dark and the wind was getting up as well. We managed a quick coffee out of a flask before moving on and within the next twenty minutes the rain had joined the wind to keep it company. 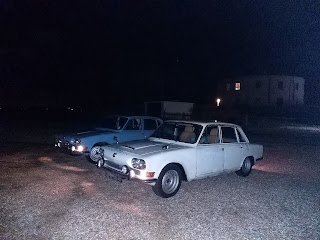 From Dungeness we travelled through Camber, Rye, Hastings and Newhaven and on towards our next planned stop at Brighton Marina. The rain was now Hammering down and the wind was battering the cars as we travelled along the coastal roads. The plan was to stop at Brighton for 30 minutes and have a cup of coffee somewhere, but to be honest, the weather was so awful we just quickly exited the cars, took a few photos, jumped back in and carried on! 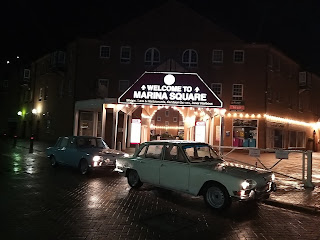 With the gale force winds now coming off the sea, we moved inland slightly and took the A27 through Worthing, Arundel and Littlehampton. We took on more fuel at Chichester and managed to have a quick chat and a laugh under the canopy of the petrol station away from the continual wet stuff falling from the sky.
Our route took us along the A27 to the M27 past Portsmouth and Southampton then onto A31 past Ringwood and into Dorset. We stopped again for a coffee and biscuits at Dorchester while the rain left us alone for a short while, but quickly hit the road when it returned with a vengeance. Honiton and Exeter were passed through and our next stop was for fuel in Whitehouse Services in Oakhampton, Devon. It was now around 4am in the morning and coffee and energy drinks were the order of the day as we were all now feeling a tad jaded. 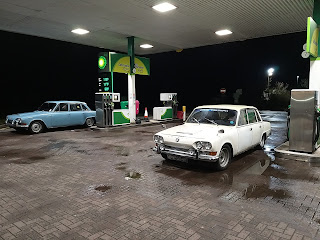 According to the satnav it was now 98 miles to our next intended stop at Lands End and we were running approximately two hours ahead of schedule. We had planned to have more coffee and break stops, but the appalling weather had kept us confined to the cars. We decided to just punch on and get there early and use the time to have a bit of a sleep when we got there.
The rain continued until we were around half hour away from Lands End where it was replaced by a freezing cold wind. It was still dark on arrival so we parked in the car park and grabbed some shut eye. Daylight arrived and we moved the cars into position for a photo shoot and then headed for Bude Castle. 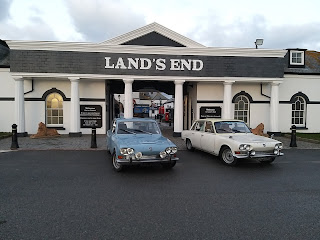 Within thirty minutes of leaving Lands End the rain had returned and with the wind as well it was like monsoon season. Bude Castle was only a quick visit because of the weather and we then found a Morrisons Supermarket with a cafe so we could get some breakfast. Very nice it was too, and cheap!
We had planned to visit Badgers Holt on Dartmoor and The Haynes Motor Museum on our route back to Knebworth, but we deemed Dartmoor to be too Dangerous with its narrow roads and slippery surfaces and the Haynes Museum was closed. The constant rain lashing down was starting to take its toll on us as well and we all decided to just head back to Knebworth. Our route back took us along the A30, M5, then A303 past Stonehenge, Andover, and onto the M3. Visibility on the Motorways was very poor due to the spray, but we made good time on the M25 which was lighter than normal. 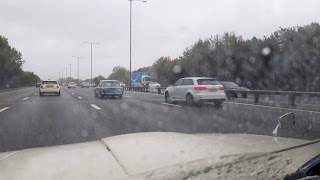 We arrived at Knebworth at around 4.45pm and after a quick shower and change of clothes we headed into Old Knebworth where we managed to find an Indian Restaurant and celebrated our trip with a good meal and a couple of drinks. We had had a good trip and driven some great roads, but the constant rain did reduce the enjoyment a tad.
Richard and I were both pleased with our cars as Richard's was doing its first trip since the 2000 engine had been replaced with a 2.5 and my car was on its maiden long voyage with its newly rebuilt cylinder head and camshaft. Both cars never had a single issue (Thank God!) and the only time Richard opened the bonnet was to check the oil. Even then the wind nearly took it off and the oil he tried to pour in the engine got blown all over the engine by the wind anyway!
A brilliant weekend away with some great company and hopefully, things will get back to normal soon so we can look forward to some other driving events.
Posted by RadSpeed Racing at Tuesday, October 06, 2020 2 comments: