A day at the Seaside!! 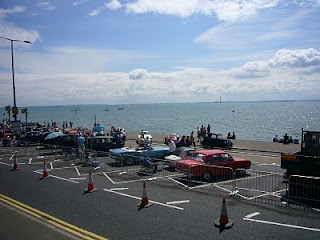 Sunday 25th July 2010 saw a rare day away from working on Triumphs when I was asked to navigate in a 'London to Southend' Classic car run. The car I was to navigate in was a 1972 Ford Consul GT owned by my good friend Andy. (The car was owned by me until a few years ago, so I know it well)
The day started off at Fairlop waters near Hainault at around 9am, where we proceeded to take all of the 'scenic' roads up to the half way point at Basildon. Once there there we were provided parking in the town square where everyone was free to do as they pleased for an hour or so. We decided to go for a McDonalds breakfast and steal some crayons from the children's play area as being the top class navigator that I am, I'd forgotten to bring any pens or pencils! (or maps!)
The second part of the run took us once again through the back routes of Billericay, Hanningfield, Gt Wakering, and finally Southend.
Arrival at Southend found us being led into a closed off section of the car park and main road at Westcliffe where the cars parked up and occupants enjoyed a stroll along the sea front. There was also a few stalls and a DJ as well to keep the crowds entertained.
The weather was beautiful and it was a good day out with a nice relaxed atmosphere, some lovely cars and good company. I'm looking forward to doing it again next year. Although hopefully in a Triumph! 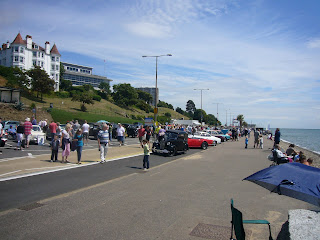 Posted by RadSpeed Racing at Thursday, July 29, 2010 No comments:

Since buying the brown estate I've had to put to put up with 'wobbly pedal syndrome'. I had the same thing with the Mk1 estate I used to own too. It tends to happen when people convert automatic cars to  manual and rather than change the whole pedal box, just fit manual pedals to the existing auto one. The problem being there is a difference in size on the auto & manual brake pedals where they hang from the bar that connects them to the pedal box. The manual pedals therefore need to have metal bushes fitted to take up the slack. without these bushes fitted, the pedals have room to move about and feel decidedly 'wobbly'.

So, seeing as there was nothing on TV and I was bored sh*tless on this particular Saturday night, I decided to head out into the garage and crack on with the job. Its a reasonably easy job, but an awkward one seeing as it requires lying across the passenger and drivers seat to get at the bolts for the pedal box. I removed the steering wheel for better access and also found myself having to remove the speedo cable and a heater hose to make life easier. Two hours later the job was done and the car no longer feels like the pedals are going to fall off every time you brake or dip the clutch! Success! 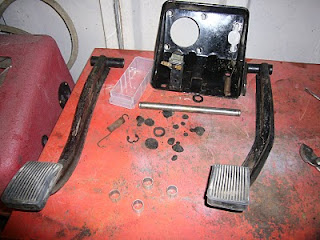 The four metal bushes that were required. 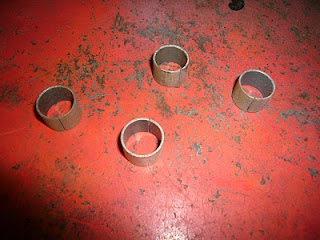 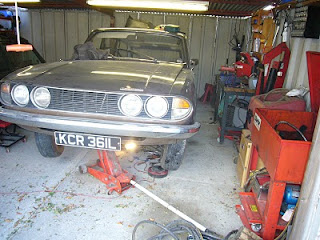 I've had an overdrive issue lately with the Brown estate. The overdrive works fine when cold, but wont kick in when the car's warmed up.
A few people suggested it could be the valves and filter in the overdrive sump clogged up, so I removed them and cleaned them all out. I also managed to destroy the gasket while I was taking off the sump so I need to order one of these on Monday. I also robbed a solenoid switch off of another gearbox I had laying around as I strongly suspect this could be the issue as well. 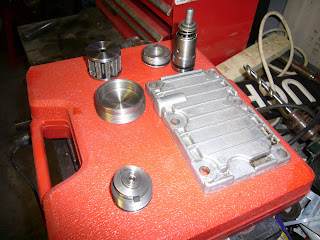 I'm now considering using this car for the Round Britain run in October instead of the rally car, (More room to sleep in the back of it!) so I need to get all of the outstanding issues sorted.
Other jobs consist of: Changing the pedal box, (It was converted from an auto set up to manual, but they didn't use spacer bushes, so the pedals are wobbly!) fixing the handbrake which is non-existent on the off side, finding out where the 'knock' is coming from on the offside front whenever we hit a pot hole or bump up a kerb, and maybe fit power steering. 2000 miles in a weekend with no power steering is just not funny!
Posted by RadSpeed Racing at Saturday, July 24, 2010 No comments: 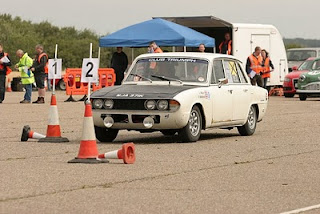 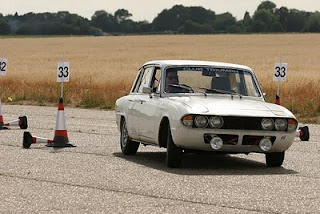 Sunday 18th July 2010 started with a 5am alarm call ready to leave Essex for 6am. We arrived at Bovingdon Airfield at around 7.15am and started preparing the car for scruntineering.
With that out of the way we did our final checks and preparations and the autotest started at 9am.

My Rally co-driver & navigator Dave Saunders was using my car for this event too, so the car wasn't going to get a chance to cool down much!
Bearing in mind that this car is still fitted with a bog standard 2 litre engine and has only had a strut brace, anti-roll bar and lowered springs fitted, it was coping quite well. At the half way stage I was in joint first place with a Triumph 2000 Mk1 with a fast engine and a well 'set up' suspension. Dave was struggling a bit at first it has to be said, but then Dave doesn't know the car as well as me, plus I think he was being a bit conservative with it not being his car.
As the day progressed we both got a bit sleeker and faster and Dave got his times down from 1 minute 25 seconds on the first run down to 1.04 on his last, while I managed to get from 1.08 down to 60 seconds point 58 on my last run.
We both enjoyed the day a great deal and will be definitely be entering again next year. Our overall results were 4th in class for Dave and 2nd in class for me.
Posted by RadSpeed Racing at Saturday, July 24, 2010 No comments: 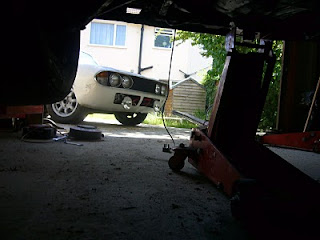 Saturday 11th July 2010. One of the hottest days of the year so far and this was my view of it for most of the day.
I was underneath my Green Mk2 estate refitting the exhaust, propshaft, clutch slave cylinder, and also discovering the differential had decided to relieve itself of its oil all over the back part of the garage floor! I have no idea why as it was fine when it was reversed into the garage the week after Easter and hasn't turned a wheel in anger since!
I also discovered that the ignition wiring has failed somewhere along the loom and the indicators have appeared to go on strike action! Whats wrong with this bloody car??? Does it not want to go back on the road??  Anyway, I had now run out of time with this car as I had to get on with a few other small jobs to get the rally car finished and ready for the club Triumph Autosolo at Bovingdon next Sunday.

The car will be driven round a layout of traffic cones in the fastest possible time, so another set of wheels & tyres have been prepared. Because of the amount of wheel spinning that'll be going on, the tyres will be shredded by the end of the day, so it's best to take another set just to use for the autosolo, then change back onto good tyres for the drive home! Of course this also means taking a trolley jack, wheel brace and in my case, another set of wheels nuts as the two sets of wheels I'm using are totally different.

Anything loose inside the car also needs to be secured or removed due to the speed the car will be flying round the course. After all, we don't want to be hit in the head by a flying fire extinguisher do we? Looking at the entry list on the website there seems to be 55 entrants!
Posted by RadSpeed Racing at Sunday, July 11, 2010 No comments: