God knows why, but Colin Wake and I had agreed to do this rally the very weekend after the Club Triumph 10CR. Not content with covering nearly 1900 miles the week before, we were now destined to cover another 400 miles this weekend!
Colin arrived at mine around 4pm and after a quick play with the spotlights to get them working again we set off for the start at Southam, Warwickshire.
The signs weren't good as we sat in the car awaiting a noise test while listening to the rain hammer on the roof incessantly. Most of the cars there were small front wheel drive with the exception of a large Volvo 740 and a Mk2 Escort. We were also the oldest car there by a good ten years.
After passing the noise test, we then sailed through scrutineering and then went to sign on. Signing on was at Southam football club and in-between signing on at 8pm and the drivers meeting at 10.30pm (Yes, a two and a half hour wait!) the dark and damp and fog decended on us.
Our time away was 12.06am and by then the fog had really become quite thick. By the time we got to the first test on a farm, it had lifted a bit, but not much. We found the course on the test very tight in a big saloon and couldn't help but have to reverse to make the turn, thus gaining our first penalty. 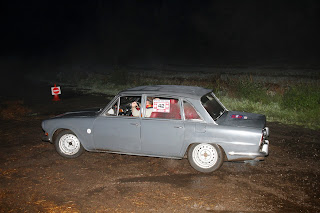 Back on the public roads, we did our best to keep time but it certainly wasn't easy in the pitch black and with the route keep taking us up farm tracks, through industrial areas and at times it even seemed like we were driving across fields or up peoples driveways!
We also stopped at one point to drag a Citroen AX back onto the road after it had had an 'off' and ended up in a ditch. After checking that Jon and Alex were ok, we carried on.
The half way 'rest' came and went while we were refilling with fuel and I have to say towards the end of the rally I was starting to struggle with sleep deprivation. 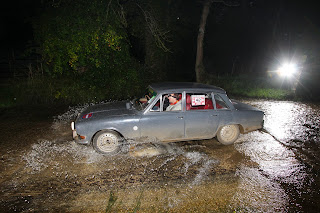 We struggled on until we eventually made the finish at 6.15am, although by then we had racked up a few time penalties. Breakfast was most welcome at the finish and I then took the opportunity to grab some sleep in the car while Colin waited for the results to be issued. I was awoken at just after 8am and told we had finished 4th in class.  It was Colin's turn to sleep then while I then drove the two  hour journey home.
Gertie once again had performed faultlessly although I have to say I don't think I've ever seen her looking that dirty. I washed it Sunday afternoon and had to change the water halfway through as I was just putting muddy water back over it! A good event though, with the only downside being the waiting around before the start. 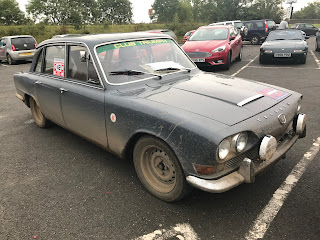 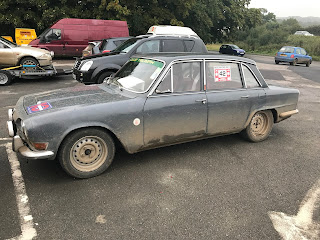 Posted by RadSpeed Racing at Saturday, September 23, 2017 No comments:

After months of wallet damaging preparation on Gertie, the '10 Countries' rally was finally here. Monday morning was spent changing my hard earned cash up into Euro's and buying a few last minute provisions to fend off hunger on the long days ahead.
My Co-driver for the event Dave Harvey arrived around 3 ish and we then spent the remainder of the afternoon trying to transfer the directions from the route book onto the latest Collins map of Europe.
After much head scratching and confusion we decided this had been a bad idea and went out for our last curry and beer on English soil for a few days.
Tuesday: We finished packing the car and set out for the port. The route to Dover was only delayed by a good old fashioned 'English Breakfast' stop on the A127. Our crossing was shared with plenty of other Triumphs, not to mention Team Torpedo from America who were running five cars. 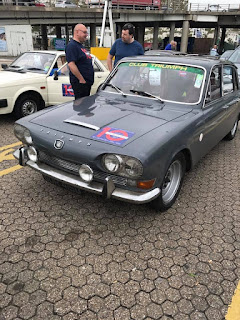 A calm crossing was followed by a quiet run down to Lomme where we were staying the night. The event started proper on the Wednesday morning. A lovely pizza was followed by 'just the one' glass of beer in a local pub. The glasses given could hold a litre of beer, (1.7 pints) so just having one was a good call. 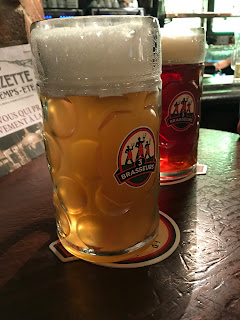 Wednesday: Despite not being hungover we still managed to arrive at the start late and most of the cars had already set off. I don't think anybody got too far though due to a horrendous traffic jam just outside Lille which caused most of us to lose over an hour.
We eventually headed down some lovely national driving roads taking in Belgium and Luxembourg before crossing back into France and heading down towards Metz and Nancy. We then crossed the  French Natural park and finished for the night in Mulhouse. Dinner was a nice rump steak and enjoyed with some excellent company in the form of Kris Schouppe and Yvan Roggeman.
Thursday: Morning dawned early but bright and we decided to skip breakfast to get on the road early and beat the traffic. This turned out to be quite successful and around lunchtime we were enjoying a coffee and an ice cream at the top of the San Bernadino Pass in Switzerland. 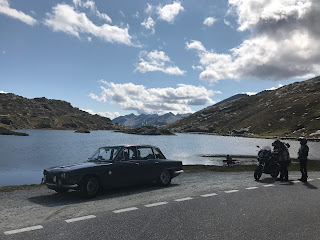 After lunch we tackled many other passes before finishing off on the Umbrail and Stelvio. (We actually ended up doing Stelvio twice, and the Gavia pass as well, but that's another story for the club magazine.)
After a longer than expected day we reached our hotel in Italy at 10pm. Luckily the local Pizza restaurant was still open and we managed to fit a meal and a beer in before returning back to the hotel for the night.
Friday: After our previous long day, we didn't fancy another extended one so we planned a route of our own. Our day took us back into Switzerland and up onto the beautiful Bernina pass. This is a fantastic road and has breath taking views as well. A perfect drive for any Triumph. It doesn't appear to be that well known yet either as it wasn't swamped with Motorbikes, cyclists, or tourists. 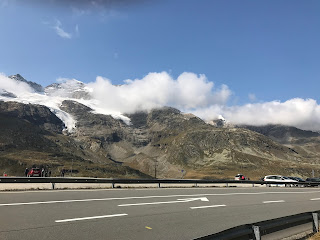 After a leisurely coffee at the top of the pass we carried on for a while before tackling another brilliant pass named the Albula. Once again, with not many motorbikes or cyclists around it was a lovely drive and completed without hassle or incident.
Our lunchtime stop included a minor repair to a split breather pipe on the fuel tank which had been annoying us with a petrol smell whenever we filled up with petrol, but disappeared below three quarters of a tank. With the rest of the car checked over we continued our journey through Lichtenstein and Austria before meeting up with some of our other crew in Singen in Germany. 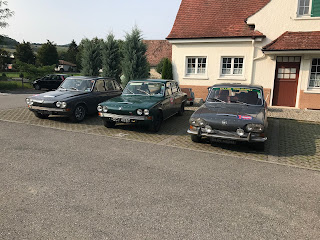 Saturday: It always seems to rain when I visit Germany and today was no exception. We left the hotel after a good breakfast and settled in for the long drive to Rolduc. We did manage to find another good driving road over near Baden Baden and it must have been popular as we met a Mini Club and a Porsche club driving it as well. (Although going the opposite way to us)
The afternoon was a long motorway drive and we met up with Colin Wake and crew who were having issues with the Mk1 Pi they were running. We followed them to Rolduc in case of any further issues they might have had, but luckily things were fine. 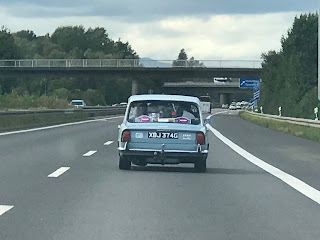 Rolduc in Holland appeared all too quickly and another brilliant 10CR was over. The celebrating of a successful run began and a good night was had by all. Serious breakdowns had been few and far between and as a far as I'm aware only two cars failed to complete the trip.
Sunday: Trying to beat that 'back to work and reality' feeling is hard when all you are doing is running home, but it was a good drive back to the port. We did leave Rolduc a little bit late and only just made the boat in time to be honest.
It had been a fantastic trip though and it's always great to see old faces and meet new friends. I'm looking forward to the next one already, but also quite fancy a trip to Ireland as I've never been there, so I might organise a little run there as a filler before the next 10CR.
Posted by RadSpeed Racing at Monday, September 18, 2017 No comments: