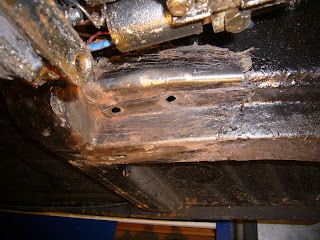 After fitting the new speedo cable to Green on Friday night, my eye caught the gearbox mount and where it bolts through floor. I thought to myself  'What the f***-  I mean, 'that doesn't look right'.
The car was booked for an appointment with a friend (and Triumph guru) on Saturday to sort out its ignition problems, so the gearbox mount would have to wait until Sunday for further inspection.
After melting off all the underseal which included smoking out the inside of the car and garage and setting light to my scraper, overalls and hair, I could finally see the extent of the damage.
To be fair, its not too bad, just awkward to get to. The surface was rubbed down and left to soak in Genolite rust remover. Welding will commence after I've had a bit more practice and feel confident enough to do it.

With this area treated and left, I started work on the rest of the car. The first real long test drive on Saturday had revealed a vibration at 55-60 mph (possibly propshaft) and 'clunking' noise from the rear, (one of the four UJ's worn) and a leaky differential.
Both driveshafts were removed, along with the propshaft, and the differential. As it stands at the moment, the replacement diff is has been fitted and the propshaft and driveshafts are on the workbench ready for fitment of new UJ's. All in all a very good days work.

Driving this car home from Colchester was great on Saturday after it's tune up and with its 2.5 engine and HS6 twin SU carburettors it just made me think that I need this kind of power (and a bit more) in the Rally car.  I have a lot of the parts to make a good 2.5 engine apart form the 2.5 engine block itself! Time to look on ebay methinks! 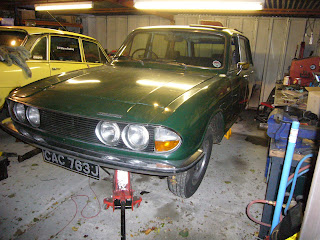 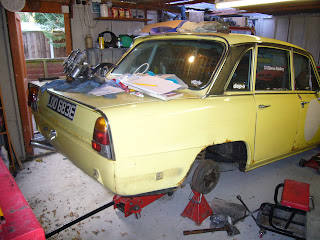 Work finally started today on 'Yellow'. After a severe battle with the wheel nuts on the nearside rear, I was finally able to get the wheels off and start the dismantling the brakes. This was after bending a wheel brace, breaking a pry bar, demolishing a socket and a sh*t load of swearing!
The wheel cylinders were, as I suspected, siezed solid with only one of the four pistons moving freely. 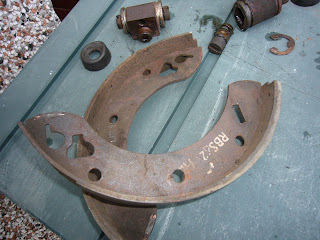 As a result of this the brake shoes ended up worn almost non existent just on this one side! The brakes had obviously been in this condition for a long time! (Pic-You can see where the lining is wafer thin at the bottom compared to being quite thick at the top!) New shoes and wheel cylinders required then! Oh yeah! and I found yet another hole in the floor to keep all the holes that I keep finding company! :-( 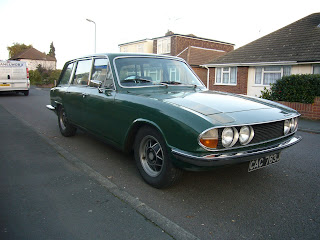 Before work started on yellow﻿, I had been working on Green, my Mk2 estate. It's now actually capable of making it out of the garden and onto the road and a test drive proved quite successful. (Surprisingly!) I think it needs some proper tuning of the SU Carburettors and possible different needles, but this is beyond my know how, so it will be farmed out to someone else. It was nice driving her again though. Even the overdrive worked!!! Just a few little jobs now to make her complete and I have a 'parts collector' again!
Rally Car!
Dave managed to get a 'day release pass' today and so came round to mine to sort out the relays for the spotlights. (we had to disconnect them at the start of the Round Britain Run as they kept blowing the fuses for everything else!) ﻿
Despite being on day release he still opted to wear his prison overalls for the task in hand (it comforts him I guess) and he was soon prepping the wiring and leaving bits of knackered wire connectors and black tape all over the garage floor. (some things never change!) 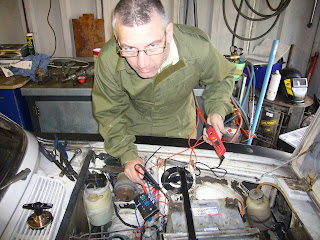 (No it's not an escaped convict-It's Dave fitting an additional fuse box to cope with the extras!)
While being supplied with hot tea and Kit kats most of the day, (Dave bought the Kit Kats actually) Dave did his thing and fitted not only additional relays, but an additional fuse box as well to cope with the extra demands all of the electrical equipment. There will be more Rally equipment being fitted too, so it made more sense to fit the fuse box and relays now. ﻿ 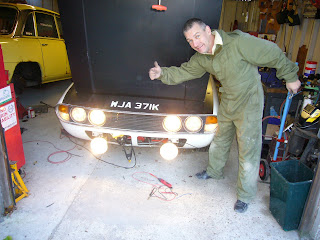 The end result is now additional lighting that can be powered up without blowing everything else, descending us into total darkness and sending us disappearing down a ditch!
Excellent!
﻿
Posted by RadSpeed Racing at Sunday, November 07, 2010 No comments: