Tuesday 27th March-Gertie's back on form!

The recent Chinese Rally (In Holland!) had left Gertie running a little bit sick. To be fair she wasn't running 100% when we arrived at our hotel on the Friday night, but she carried on regardless and was never really a cause for any concern. On high revs and motorway speeds she was fine, but on tickover and slow running speeds she had a constant misfire that I just couldn't get to the bottom of. After tinkering half of Saturday and until late last night and with time (and patience!) running out before the HCR this weekend, I dropped her off at Carlow engineering to let Gordon have a play and see what he could find.
When I collected the car from there tonight, Gordon revealed his diagnosis........I had blown the inlet manifold gasket on ports 1 & 2. Oh dear! Maybe we were trying a bit too hard in Holland then! While talking to Gordon, I also mentioned our issue of constantly blowing no.1 fuse and everything that it affected. Gordon suddenly said 'Oh! I might have cured that then. I've just bent a spare tab on the voltage stabiliser out of the way because it was touching the clutch master cylinder resevoir'. He then led me over to Gertie and opened the bonnet to show me what he meant.
On the bulkhead of the Mk1 is said voltage stabiliser. Close (in fact dangerously close) to the stabiliser is the reservoir for the master cylinder for the clutch. The reservoir should also have a bracket that holds it tight to the bulkhead. Mine is missing! So the reservoir was moving every now and then, and when it was, it was touching the spare tab on the voltage stabiliser and shorting it out and subsequently blowing the fuse ! As I was in the middle of trying to eliminate the problem, the temperature and fuel gauges were currently disconnected, so when I arrived home I reconnected them, (They are on the same wire on the fuse box) then bent the spare tab on the stabiliser back over towards the reservoir and then made the two contact. Sure enough there was an instant spark and the fuse blew again! So it looks highly likely that this was causing the 'blown fuses' issue in Holland. I then decided to move the voltage stabiliser away from the reservoir or any other 'loose' parts.  I also now need to look out for the bracket that holds the reservoir tight to the bulkhead. 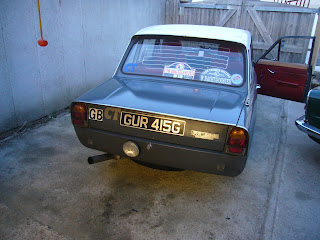 Whilst tinkering with the car on Saturday, I decided to remove the bumpers. I love the 'bumper-less' look on  Mk1's but wasn't sure if it would work on Gertie with it being a darker colour. However, with Gertie now having a cream roof and cream wheels, maybe it might just work? In the end, I couldn't fight the urge anymore and bit the bullet and took them off. I have to say, I was pleased with the result and I think she looks good.
With the car now running well and sounding good, I'm looking forward to the overnight challenge of the Historic Counties Rally this weekend. 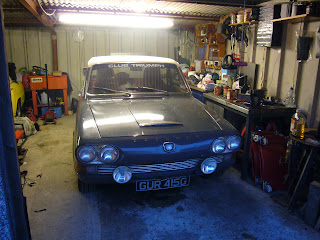 Posted by RadSpeed Racing at Tuesday, March 27, 2012 No comments:

At long last the night rally in Holland was upon us. My Navigator for the event was Doug Foreman who arrived with me on the Friday morning an hour earlier than expected. This turned out to be a bonus (or so we thought) as the traffic in the area was pretty much at a standstill.
We battled our way through Essex and down to Dover hoping to catch the earlier Ferry. (Our booking was at 14.00 but there was one at 12.00) However, this was not to be as the 12.00 boat was in dry dock awaiting repairs, so we were faced with a lengthy delay. (As you can see by the bored looking Mr Foreman) 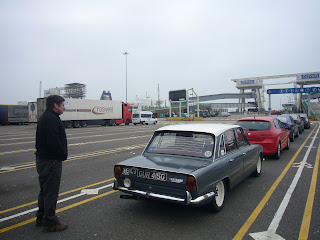 The two hour crossing to Dunkerque meant that it was 5pm local time when we left the Ferry, so we hiked it up to motorway speed travelling up through Gent, Antwerp, Breda, Tilburg and finally towards Beekbergen near Appledorn. While on route we stopped in a Belgium roadside cafe where Doug spotted something on the menu by the name of 'Cheesecrack'. I whispered to Doug that I might ask the waitress if I could see her 'cheesy crack' but thought better of it. In the end we both settled for Goulash and Frites.
After leaving the restaurant and while travelling at around erm....70mph-ish the revs increased for a second and then went back to normal again. It felt like the overdrive had dropped out momentarily. It was at the same time that we realised that we had no temperature or fuel gauges, indicators, wipers, washers or brake lights. The no.1 fuse had blown!
We managed to get to our hotel ok and decided to investigate our electrical issues in the morning as there was some decent alcohol in the bar to be consumed before bedtime.
Saturday morning saw replacing the fuse and also changing the points as Gertie had started running a little sick. Our search for petrol on Saturday morning found us a nice line up of Ford Transits. I can't remember the last time I saw one, let alone this many! 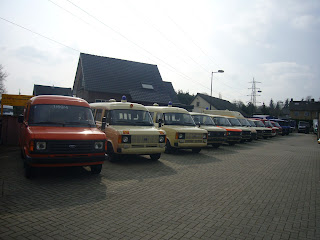 After finding some petrol we also found that Gertie was running worse with the new points and had also blown no.1 fuse again. So, we returned to the hotel and cleaned up refitted the old points. We had another look at the electrics and cleaned up the fuse box in the hope that that would do the trick.

Saturday afternoon saw us and the other CT British crews that had arrived head down to the Wok Chinese Restaurant for the buffet and event start. (This is why it's called the Chinese Rally) There were lots of other cars competing in this one and the competition looked good. 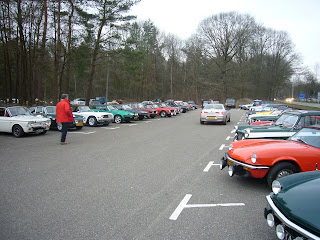 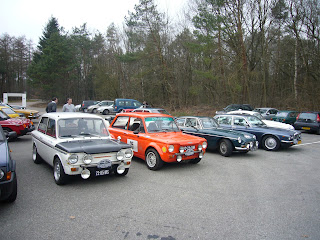 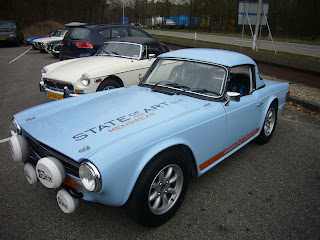 Our start time was 18.25 (CET) and thanks to my top class navigator we were soon picking off the routes and picking up plenty of code boards. We once again blew another fuse and trying to trace it decided to disconnect the brake light switch as we thought this might be causing it. This wasn't the case though as we still blew another fuse with this disconnected! We carried on regardless and managed to complete the first half of the rally. (This was the competitive half) However, with about 11kms left to go to the half way point the rain started coming down. With no windscreen wipers we headed to the halfway point very carefully and enjoyed coffee and cake while waiting for the rain to stop. Once it had, we decided to play safe and call it a day and head back to the finish.
Once at the finish we enjoyed a couple of small beers and then headed back to our hotel. The bar in our  hotel was closed so Doug and I retrieved some beers and crisps from Gertie's boot that had been purchased for just this kind of emergency!  I managed to find an English TV channel showing the days football and Doug later managed to find some euro channels involving naked ladies cavorting about! Maybe that's what the people in the room opposite ours was watching as there was certainly a lot of 'man grunting' coming from there! (but no female noises I hasten to add!)
Sunday morning saw us faffing about with the electrics again, although this time we managed to get the wipers, washers and brake lights working without blowing fuses. I also mistakenly thought our ferry crossing was at 4pm, but it turned out to be 2pm, so a high speed chase back to the port was the order of the day to make that deadline. I thought we did alright seeing as we were still in Beekbergen at 10.10am!
Another 2 hour crossing saw us depart Dover late Sunday afternoon and head into more rain before arriving home. (Good job we managed to get the wipers working!)
We had a memorable weekend away, met some great people, and drove some fantastic roads. Apart from her small issues Gertie performed well. So much so that I might postpone her engine change and use her on the HCR!
Posted by RadSpeed Racing at Thursday, March 22, 2012 No comments:

Seeing as my mate Dave had a free day today, he came round to finally finish fitting the headlight relays to the estate. He'd already done the full beam lights quite some time ago, so it was the dipped beam that now needed attention. 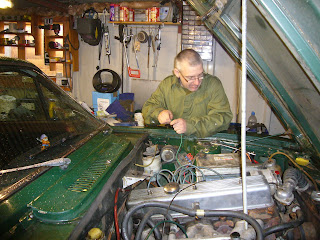 The car is lined up for the Historic Counties Rally at the end of March and as this rally is an all night one and the headlights will be on for most of it, we thought it best to get them finished.
While Dave was pulling wires about and playing with his multimeter, I was underneath splashing a bit of underseal on so the car looked good for the MOT tomorrow. Fingers crossed for that!
Posted by RadSpeed Racing at Sunday, March 04, 2012 No comments: