Friday morning 6.45am saw me heading towards Latchingdon to meet Dave Jones and collect a car trailer. Dave had bought a Mk2 Triumph 2.5Pi and due to it being a non-runner needed transporting home.....from Wigan!
By 7.30 we were on our way and cutting across country through Chelmsford before joining the M11 at Bishops Stortford.
We stopped for Coffee, Croissants and Diesel near Stanstead and carried on across the A14 and M6. Just after Birmingham we started seeing signs on the overhead gantry's stating 'long delays junction 23 to 25'.  Bugger! It was junction 25 of the M6 that were due to come off at. Not long after that the signs changed to read 'M6 closed at junction 25'. Double bugger! Just our luck.
A quick phone call to the seller was made and he advised us to come off at junction 23 and head up the A49. It was better, but everyone else had that idea, so it was slow going.
We eventually arrived at the pick up point at around 12.45, so it wasn't too bad I guess. We loaded up the car straightaway and set off for the return leg. 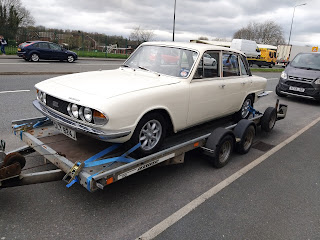 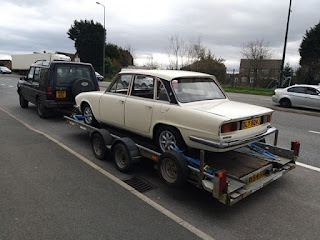 We found a chip shop before the motorway, so a very greasy cod and chips was consumed. (Actually, I only ate the fish and gave the chips to Dave-too greasy for my liking!)
We suffered a small delay around junction 24 on the way back, but nothing too serious. The Triumph  was to be delivered to Cheshunt in Hertfordshire, so the M1 was our favoured return route. Surprisingly for a Friday afternoon it wasn't too bad. I have to say though, the amount of people we saw using mobile phones whilst driving was quite alarming. But then I suppose with our wonderful government doing away with police on the streets and police cars on the motorways (When was the last time you saw one?) then people are going to take chances and risk it aren't they?
A quick cup of tea at Cheshunt and we were soon on the M25 again and off to Latchingdon to return the trailer. By now it was approaching 7pm and I was feeling the effects of the long day. Luckily the M25 and A12 was clear and we arrived at Latchingdon at 8pm.
With the trailer safely delivered I finally arrived back home at 8.45pm. I worked out the mileage and fuel use the following day to find that my 22 year old Landrover Discovery had covered 516 miles and averaged 22mpg. Not bad considering nearly half of that mileage was covered with an empty car trailer in tow and the other half with a 1400kg car on it as well. The old girl did good and never missed a beat. 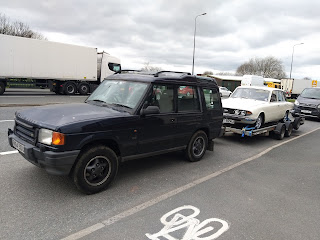 Posted by RadSpeed Racing at Sunday, March 31, 2019 No comments: