After the recent seat modification, I decided to take the car to work on Thursday to test my new driving position. This in itself was fine and I'm happy with the results. However, a nice drive in the sunshine was ruined by the constant banging from the nearside rear. To be fair, it had always been there since I bought the car, but now it was getting progressively worse.

Once home from work I put the car in the garage and got it up on axle stands with the rear wheels removed ready for inspection Friday morning. On removal of the shock absorbers I discovered that someone had fitted an extra dished washer above the rubber that goes through the shock absorber mount. So therefore instead of the rubber bush making direct contact with the mount and thereby being cushioned, the dished washer was making contact with the metal mount and no cushioning was taking place. Hence the metal banging sound whenever the suspension travelled up and down.

So with the extra dished washers discarded and the bottom shock absorber bolts fully de-rusted and coated in copper slip the shocks were refitted and the car was bounced up and down as a test. Excellent! I had now had no banging noise, but a test drive would have to be the real test.

Whilst under the car, I also had another look at the exhaust. Despite fitting an extra bracket on the rear a few weeks back, I could still hear it knocking slightly when the car was on tick over. I could also see marks on the exhaust and the back axle casing where the two were coming together. Being a bit short on time I made up a temporary bracket just in front of the back axle to stop sideways movement of the exhaust and hope that would cure my irritating exhaust knock. 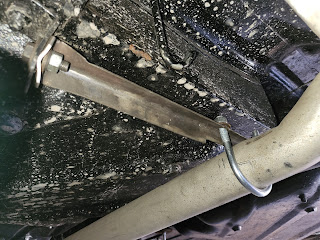 So, after all my exertions, I took the car the work for another test drive. Wow! What a difference! It was like driving a different car. I was very pleased with my mornings work and also pleased that the car is now getting where I want it to be after the magnitude of bodgery that I have come across so far.
I must be starting to like it, I even polished it while I was at work! 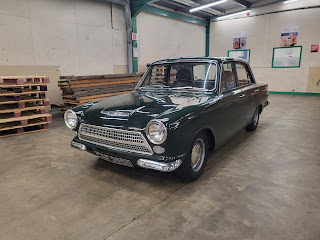 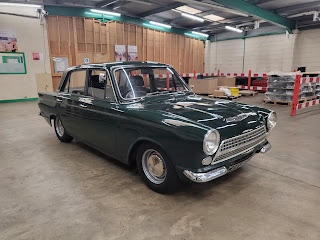