After Gertie's successful test drive last Monday night a couple of minor jobs came to light that needed attention. One was the knocking exhaust and the other was a non working speedometer. Another job that had been on the list for a long time was the noise from the electric petrol pump.
I already knew what was causing the issue with the speedo. The thread in the housing that the angle drive screws into was knackered and so the angle drive just kept falling out. Luckily a second hand one came up for sale on ebay (complete with angle drive)  and I was lucky enough to win it for the grand total of four English pounds! 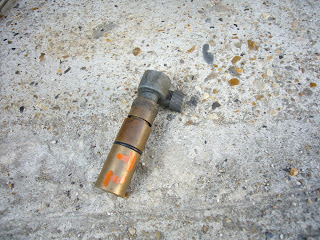 To fit this I had to lower the gearbox down, and so decided to do the exhaust at the same time. While doing the speedo,  I also noticed what was causing the exhaust to knock. In the haste to put Gertie back together I must have put the gearbox crossmember on the wrong way round. One side is lower than the other side to allow for the centre section of the exhaust to pass through. Having it the wrong way round loses about 6-7mm of clearance. (see pic below) 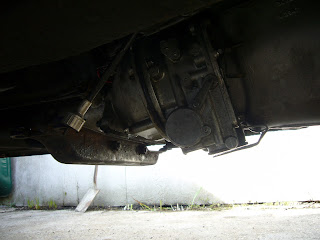 With this turned round I also set about fitting a new shiny exhaust bracket that I'd recently bought. The bracket bolts onto the side of the gearbox and hopefully stops too much movement. 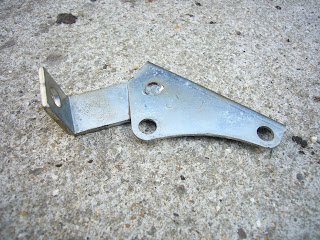 The last job on the agenda was to sort out the electric petrol pump. This is mounted on the inner wing via a metal bracket which holds the pump. The 'metal on metal' fitment was causing a lot of vibration and making the pump very noisy as well.
After going through the spares bin I found two twin studded rubber mounts. (Similar to engine mounts, but smaller) I fitted these and then turned the ignition on to see if it was any quieter. It was a lot quieter-it wasn't working at all! Then I realised that the rubber mounts in between the pump bracket and the inner wing had taken away the earth. So, with an earth lead made up and fitted in place the pump was working again. It was a lot quieter too.
By the time these jobs were done time had gotten away from me so a test drive will have to wait for another day. I did start the car up for a few minutes and let it idle and the exhaust wasn't knocking on tick over like it had been, so things sounded promising. ﻿
﻿
﻿
Posted by RadSpeed Racing at Sunday, August 26, 2012 No comments:

Part of my work for Saturday actually started on the Friday night with the part removal of the steering column. I had noticed the week before that the steering link assembly had quite a bit of movement in it and should really be replaced. Dave Maton was coming up to do some welding on his wife's Herald convertible so I made use of an extra pair of hands while he was around.
By the time Dave had arrived Saturday morning, the old steering link had been removed and the new one was ready to fit. 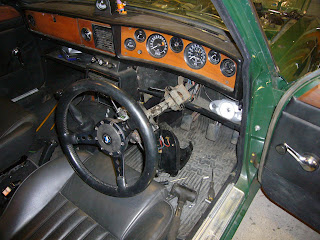 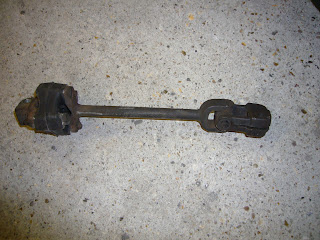 With this job done, the estate was relegated to the garden and the Herald convertible was shoved into the garage so Dave could get on with his welding. Once he'd done his bit, he even managed to find some that needed doing on my estate as well!
My rusty piece of floor was cut out and a Tescos Fruit & Fibre template was made to construct a suitable replacement panel. (This was probably the nearest to healthy eating Dave's ever been!) :) 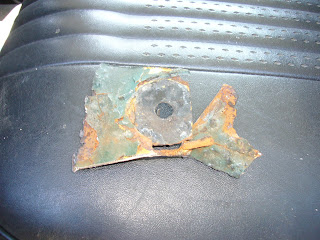 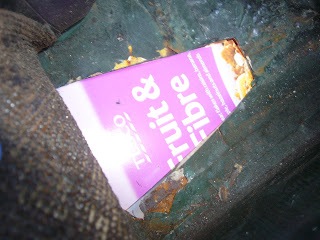 While Dave was cutting, burping, grinding, burping, filing, burping, welding, farting, swearing and burping, I was getting on with putting Gertie back together. By about 8pm, she was already to be fired up. We couldn't get the oil pressure up with no spark plugs in and turning it on the starter alone, so we ended removing the distributor and the timing cog wheel. We then fashioned a screw driver  bit to fit over the top of the oil pump drive. (see pic below) Once the oil pump drive was spun with an electric drill in reverse, we got the pressure we needed and was able to attempt  detonation! 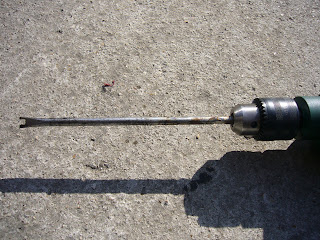 After a few abortive attempts at starting which included a backfire loud enough to set all the neighbourhood dogs barking and was powerful enough to rid the back box of a good quantity of soot, she suddenly burst into life. Apart from the tappets (new cam followers) she sounded good but as it was now it was dark, we quickly set the timing with a strobe light and called it a day.

A phone call to Carlow engineering on Tuesday revealed that my engine was going to be finished on Wednesday and ready for collection. I had already committed myself to collecting another 2.5 engine on Wednesday that I had won on ebay, so I made arrangements to collect it on Thursday instead. (As I found out the hard way, you never know when you will need a spare engine!)
With my original engine collected, I then went down to NE Classics in Hordon to purchase a new spigot bearing as my one was a bit worn.
I had booked the Friday off of work and Dave Maton came up to give me a hand with proceedings. Not only with the engine, but also to help change the gearbox on the estate. The J type on the estate was showing signs of wear and the gear change had been getting quite stiff and notchy when warm. If Gertie isn't ready for the RBRR and we have to use this car, the last thing I want is a stiff gear change for 2000 miles!
I made a start at about 7.30 by disconnecting the battery and removing the gearstick and Dave arrived at about 8am. By 10.15 the gearbox was out and on the floor and all was looking good. The gearbox going back in was an A Type gearbox, so a few minor changes such as the gearbox mount, speedo cable and the floor studs brackets had to be made before refitting. (It also needed a relay fitted for the electrics, but my other mate Dave was coming round later to do that as I have no understanding of anything electrical!) We also had to move the exhaust as the A type sits higher up than the J type. 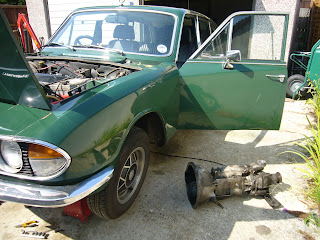 With this done the next job on the agenda was fitting new brake pads on the rear of Dave's Volvo estate. This only being a one man job was carried out by Dave while I took charge of the Food and drinks. This was probably the hottest Day of the year so far so the Pepsi Max and cold drinks consumption levels were quite high. (Especially as Dave doesn't drink hot drinks either!)
With the brakes done we turned our attention to Gertie. This was only going to be a quick install as I am still waiting for new cam followers to arrive, so there isn't much I can do until I get them.
The refit was quite straight forward with the only annoying thing being one of the brand new engine mounts breaking as soon as a bit of weight was put on it. Not impressed! 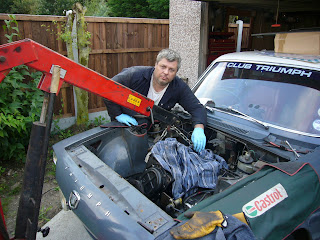 (Davemate assists with the refit)

While Dave and I were messing about with the refit, the other Dave arrived to sort out the relay and electrics for the other car. Tea was made for the new Dave and the last of the Pepsi Max was given, then spilt over Davemate and also over the other Dave's four day old phone. I am a clumsy git at times. :-) 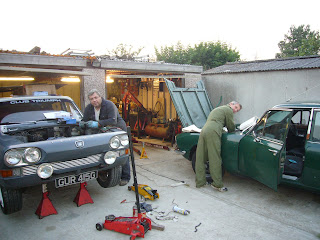 (The two Dave's at work)

By now, time was getting on and Davemate made tracks back to Hertfordshire. The other Dave stayed and continued with the wiring and by the time it was all up and working and looking pretty it was gone 9.30pm. So, a long day, but a good day. A test drive in the estate revealed that the gearbox and overdrive work fine, but the exhaust will need adjusting as it's knocking on the rear cross member. Hopefully, the cam followers for Gertie will arrive soon and if I can some early nights away from work, then she should be up and running again soon. ﻿

At present Gertie's engine still hasn't been righted or returned, so preparation work continues on RBRR back up car CAC.
There was a couple of issues I wanted to try and resolve this weekend, The main one being the tracking. This was done by one of these tyre service centres a few months ago, but it didn't seem to make a great deal of difference. So, I returned it to them today and after a short inspection, they referred me to somewhere that did four wheel alignment. (Free of charge) They had a play with it and adjusted it until it was reading correctly on their machine gadget thingy.
It felt better but sill didn't seem quite right. To be honest it hasn't driven completely straight since I had the steering rack reconditioned, so maybe I need to look in that area again. I'm also not sure if I'm imagining that it seems to lean over to the nearside when I'm driving it, so I may change the front springs as well to eliminate that. (When my mate brings my spring clamps back that is!)

The other job I wanted look at was the rear UJ's on the inner drive shafts. The outer part of the drive shafts have new UJ's and new wheel bearings, so they weren't an issue.
I'd also noticed recently a scuffing type noise when driving and a clonking when pulling away occasionally. Thinking the scuffing noise was possibly a dry bearing in the diff input shafts I removed these as well, but these appeared to be good.
While inspecting the yokes that the UJ's sit in I found that one of them appeared to have gone seriously oval shaped! 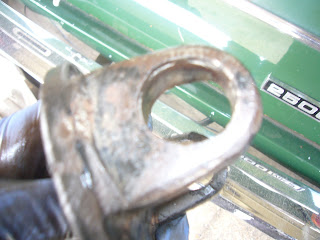 Hopefully this will turn out to be the reason for the 'clonking' that I can feel occasionally when I  lift the clutch pedal a little too sharply! Luckily I had a good spare in the parts bin, so this was replaced.

With the new UJ's installed and everything replaced I bolted everything back together.....and then found my 'scuffing' noise. For some reason one of the brake shoes is catching on the brake drum, but only in one particular place. However, close of play was now on me so I retired for the night and will add the brake shoe issue to my rising list of jobs to be done before October! 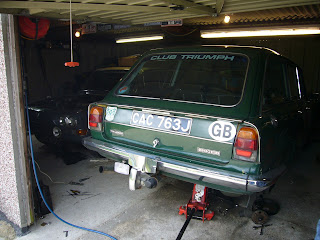 Posted by RadSpeed Racing at Saturday, August 04, 2012 No comments: