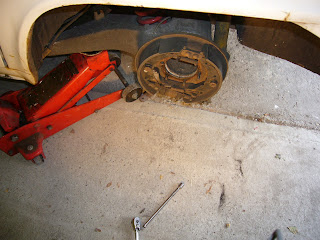 The 2100 miles we ended up doing for the RBRR were handled well by the car, although I had started to notice a 'droning' noise around Sunday morning heading across to Dartmoor from Bude in Cornwall.
The initial thoughts of it being my Co-Driver Dave were soon dismissed when I realised it was still evident when he was asleep. (Which was a lot!)
The first place I looked at was the propshaft, although it had had new UJ's and been balanced and should have been ok. The new UJ's were fine, so the slide mount was then re-packed with fresh grease and the differential was topped up with oil. Were we now good?  Were we b*llocks! A test drive over to Harlow on the Saturday night proved that we wasn't!

Sunday afternoon, while Dave was fitting relays to the Spotlights (We had to disconnect these at the start of the RBRR as they were drawing too much power and would have burnt out the full beam switch-We took action before 'Lucas' The prince of darkness did it for us!!!)  I decided to check the rear hubs and rear wheel bearings. I discovered that the drivers side was fine, but the passenger side had movement. Not a good sign! So the nearside drive shaft was removed and scrutinised. 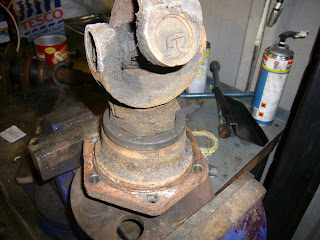 With the driveshaft removed and clamped in the vice, it was discovered that the cap that houses the rear bearing (the black circular bit under the two large nuts)﻿ could be moved by hand. This indicated that we had indeed had a bearing failure and would be where the 'droning' noise was coming from.
Unfortunately, changing the bearings on these is somewhat impossible without the proper tools and a bench press. Luckily though, I had another driveshaft in stock with new bearings in, so that was fitted instead.
A further test drive revealed that the problem had been solved. The car was still a bit noisy from the rear, but that may have been due to the fact that I have removed the back seats! Like the bumpers, (which have also been discarded) they are just heavy and serve no purpose, so why do they need to be in  a rally car? :-)
Posted by RadSpeed Racing at Sunday, October 24, 2010 No comments: 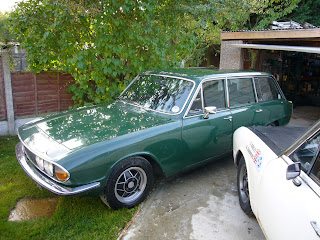 I've been off work this week on annual leave and I had already decided that I need to get CAC (763J) drivable again! This car was on the road until Christmas 2009 when it decided to overheat big time and sieze its engine on the way home from the Club Triumph Essex Christmas meal. It nearly made it home, but siezed about 200 yards from my house. So the girlfriend at that time and I pushed it the rest of the way and into my garden. (She wasn't impressed in her high heels and party dress!) The car started again the next day after it had cooled down, but serious damage had been done by then and all sorts of clatters and rattles were coming from the engine!
Due to other projects (Building a double garage) and lack of funds, the car was then parked up for a while until the garage and other stuff was out of the way. 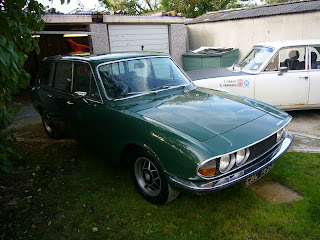 The first weekend after Easter, the garage was up and the estate was reversed in and work started pulling the engine and geabox out. I had decided to convert the car to manual overdrive while it was having major surgery, (I dont like auto's) so the parts list was drawn up and all the required bits were gathered. I got to the stage where I had put another engine & gearbox in, but then for some reason, I lost all motivation on all of my cars for a few months and did nothing at all. Then though, the realisation set in that I had to prepare the rally car for the Round Britain Reliability Run, so once again, the estate was put on the back burner.
However, now that the RBRR is over, work has re-commenced. All the ignition issues were resolved yesterday, (although I'm still not happy with the electronic ignition and might go back to having points) and today the clutch was bled and made good. I still have lots of interior bits to put back in and I cant bloody find the new speedo cable I ordered for it, but its running and it actually moved under its own power for the first time since Easter! As a treat for it I thought I'd drive it out of the garage and give it a wash! It now looks like a car again rather than a workbench!        Work will continue tomorrow! :-)
Posted by RadSpeed Racing at Thursday, October 07, 2010 No comments: 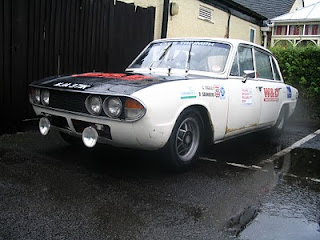 Well, after months of preparation, Friday 1st October 2010 finally arrived and we made our way down to the start point at The Plough Public House in Crews Hill, Enfield.
Our spirits were high, if slightly damp by the constant downpour that had been with us all day. It also spooked us a bit that the first song that came on the radio when we got in the car was 'Road to Nowhere' by Talking Heads!
After a few hours in the pub catching up with some old faces and meeting plenty of new ones, the start time arrived and 109 Triumphs gradually left the car park to begin the 2000 miles to be covered in 48 hours.

We headed north up the A10, then eventually onto the A1 (and the rain was still falling!) for our first control point at Blyth services near Doncaster. The next stop after this was at 2am at Edinburgh Airport. We had it pointed out to us that our brake lights weren't working, so after discovering a wire that had come off the brake light switch, it was put back on and we continued.
Skiach services on the A9 north of Inverness was out next stop, where we stopped for a quick coffee and Petrol (Again!) then pressed onto The Seaview Hotel at John O'Groats for a well deserved breakfast at 8.30 am. 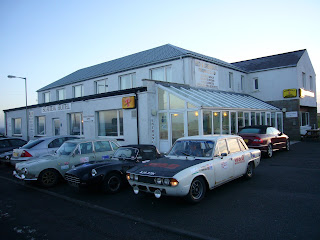 After Breakfast and a check of the Engine oil and wheel nuts, we then headed west to Thurso, before turning left onto the B871 and heading down toward Dingwall. The Conon Bridge Hotel was our next stop where lunch was on offer, and so after devouring that we then headed down past Loch Ness and down towards Fort William. After Fort William we then tracked back across the A82, past Ben Nevis and to the Saturday tea-time stop at Stirling. Apparently, this throws the 'first time' crews into panic as they realise that they are still in Scotland on Saturday evening and still have to get all the way down to Lands End and back up to London Yet!
So after a brief stop there we then took the M74 & M6 to Lancaster services for the next check point. (9pm) We came out of the services to find that the car wouldn't start! We had ignition lights but it wouldn't turn over. A quick look under the bonnet revealed that a wire had come off the starter solenoid. So after pushing it back on, it started and we were on our way again. We rejoined the M6 and carried onto the M56 where we headed for Wrexham in North Wales and the next halt at Gledrid. (11pm) After making sure the tank was full to the brim again (There were no 24 hour petrol stations where we were heading!) we set out again through the pitch black and into Mid Wales and eventually the Sugar Loaf picnic area in Carmarthenshire! We were doing well at this point. Although it isn't a race, we were the first car to arrive at this check point. (1am)
Only a minute stop at this one, then back out into the darkness to pick up the A40 and head back towards Monmouth. We then picked up the M4 and headed back over the Severn Bridge from the Welsh side and onto Gordano services on the M5 for the next halt.  This was a 45 minute stop and was much needed as by now it was 3.30 Sunday morning and we were on our second night without sleep!
The run down the M5 and then A30 towards Bodmin was probably the worst weather I've ever experienced! The rain was so hard, it was bouncing back up at you, and the gales were smothering us in wet leaves and trying to blow us off the road! We carried on undaunted and arrived at Lands End at around 8am. 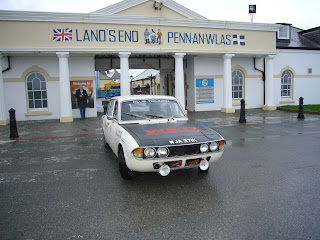 A quick U-turn at Lands End saw us head back up the A30 to Scorrier for another well earned breakfast at 8.43am. After checking engine oil, all fluids and wheel nuts we set out for the next halt at Bude Museum (11am). There was a good display here from the organisers who had also planned a classic car show at the same time. It was quite a sight to see Triumph after Triumph pouring in and one old boy was heard to say to his mate 'I wonder where they've all come from?' If only he'd known!
After sorting out some sparking issues (with the help of Andy Pearce and 'Shedtune') we pressed on to our next halt at Badgers Holt at Dartmoor (12.25pm) A quick wash and change of clothes in the toilets and we were off again to head for Dorchester and across to the halt at Pimperne. (2.50pm) This was a village hall and the ladies from the local Women's Institute supplied us with tea & wonderful cakes. Very much appreciated by all as well!
We left here to head through Hampshire & Wiltshire & into West Berkshire, then crossing the M4 at Junction 14 and heading up to the penultimate checkpoint at the TR Register offices at Didcot in Oxfordshire. (5.25pm) This was only a minute stop and we were soon off again to head for Aylesbury in Buckinghamshire before picking up the A41 to back towards the M25 and the finish point at Enfield. (7pm)
So, we arrived back at The Plough in Enfield some 48 hours and 2014 miles later! We spent £426 on petrol, and raised around £882.34 for charity. (This was just our crew)
All in all, a tiring, but fantastic weekend. We had some great times and met some great people! The car was absolutely brilliant as well. The poor old girl was hardly ever switched off, but just kept going and going. 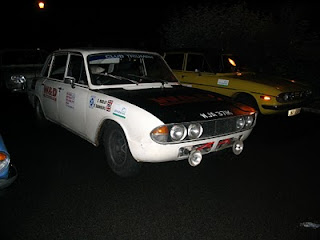 She looked so dirty and tired at the finish, but she's had a good tidy up and clean since then. A big thank you to all that supported and sponsored us!

Posted by RadSpeed Racing at Tuesday, October 05, 2010 No comments: