Another mammoth journey this weekend, this time to collect a Triumph Mk3 Spitfire from 'oop norf'. The car had been bought by Colin Wake unseen, so it was to be a bit of a  surprise when we got there.
The meeting point for the latest expedition was Latchingdon in Essex where we once again scrounged a trailer off of Mike Helm. 7am was the planned arrival time and this would be the third Saturday on the trot that I'd not been able to have a lie in.
Mike was already up and about when I arrived, so before long the trailer was hooked up and we were awaiting the arrival of Colin Wake 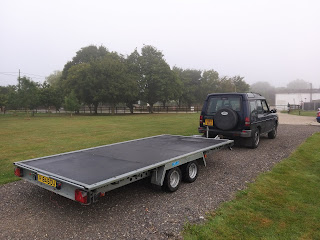 Keighley in Yorkshire was our destination, but not before a quick diversion to Chellaston in Derby to collect the differential that I had dropped off at Dave Harvey's the week before. The weather was better than the week before and we made good time arriving at Dave's just after 10am.
After a coffee and a chat, we grabbed the differential and were on our way again continuing north bound up the M1.
Colin had text Bryce (The guy selling the Spitfire) to give him an eta of 1pm which turned out to be a pretty good guess as we pulled into the yard at bang on 1 o'clock.
We were greeted by a pile of bits that at one time used to be a car and realised it would take some time to get it all loaded.

I don't know how long we took getting everything loaded, but I know there was far more stuff than we first realised (3 engines, 2 gearboxes etc) We then headed towards Skipton, but cut across country and ended up going through Otley and past Harewood House before stopping for diesel and food at Ferrybridge services. (We hadn't eaten all day) We then realised it was already 4pm and we still had many miles to cover.
After a bite to eat and a coffee, we put £40 of diesel in the Land Rover (We weren't going fill it up at a scandalous £1.55 per litre!) and headed south. Our route took us down the A1 and A14 across to Ipswich before taking the A12 to Colchester. ( We stopped at a Tesco superstore near Cambridge to get more diesel)
We arrived at Colin's at around 8.30pm where I dropped the trailer for Colin to offload and return at another date. 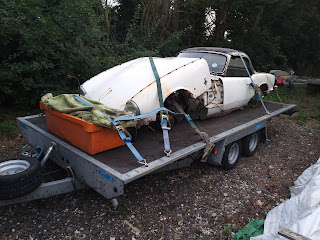 After a quick coffee I made tracks back to Leigh on Sea arriving home at 10pm. The old faithful Land Rover had clocked up another 594 miles on this trip and once again, never missed a beat. 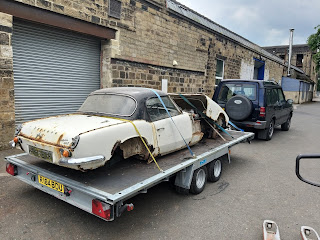 I don't have any further long trips planned at present which is just as well as I'm ready for a break from them. I worked out today that not including going to and from work or other local trips, I've covered 3067 miles since the 15th June!

Posted by RadSpeed Racing at Monday, August 05, 2019 No comments:

Following the trip to Wales it had come become evident that the differential in the Pi wasn't quite right. So, after arranging for repairs and adjustments to be carried out, the offending item was removed from the car and plans were made to drop it off at Dave Harvey's place in Derby where he would then take it to where it was being repaired on Monday
A very rainy Saturday morning saw me leaving Leigh On Sea at 5.30am to head for the M1 and up to Derby. The rain was continuous, although it did manage to ease off by the time I stopped at the Watford Gap services.
The roads were clear and I made good time up to Derby. Too good actually as I didn't want to arrive at Dave's too early, so stopped for a coffee at Derby services to kill some time. 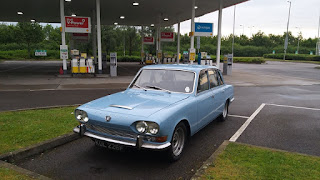 On arrival at Dave's more coffee and sausage cobs were on the agenda and soon after Adrian Hadfield arrived to start preparing Dave's car for its impending accident damage repairs. Adrian's work is top class and it's good to watch a real expert at work.
Before long the rain started again and it now looked like it was here for the duration. Around 2pm I decided to make tracks and head for home. Sure enough, the rain was indeed here for the day and I never turned the wipers off all the way home. The traffic was kind though and I arrived home around 5pm having covered 310 miles round trip.
The car ran well, although seems to be running hotter than I would prefer. Further investigations will be required.
Posted by RadSpeed Racing at Monday, August 05, 2019 No comments: