That special time was on us again. The famous RBRR. I had been looking forward to this event for some time, although a few last minute issues with the car saw me preparing another one as back up just in case!
The Mk1 Pi was the weapon of choice and after some last minute metering unit tuning by co-driver Dave Harvey we were set and all ready to go.
This RBRR was to be different for us this time as we had decided to run as a two car team with Richard Warr & Dave Maton in the other car. (We were also both  running as a two man crew as opposed to the usual three man.)
We met up at a Tesco superstore at Knebworth and after discovering that they didn't have a café, resorted to a nearby carvery for a good roast dinner before our drive through the night.
Disaster struck when we were waved off as Richards car decided it didn't want to go and broke down with fuel supply issues before even leaving Knebworth! Frantic efforts were made to get it running, but after an hour we had to admit defeat. Luckily Dave Maton had brought his Mk1 to Knebworth to meet Richard, so they swapped all the tools and spares over into Dave's car while we shot off to try and persuade the marshals at the first control at Wetherby to stay open and wait for them.
As we were now an hour behind right from the start, we pushed on up to Wetherby and made good time. By the time we had finished our coffee, Richard & Dave had caught us up too.
We were now running right at the back of the pack, so time was tight. We persevered, but the rain and dismal conditions were holding us back.
We just about made the next control at Carter Bar before it closed and quickly got the book signed before heading off to Knockhill Race circuit. An added issue was that my brake lights had now packed up and the plastic  switch fell apart while under investigation! I went in front and used the walky talky that Richard had brought to warn them of when I was braking.
Knockhill was a welcome sight and luckily I managed to borrow a brake light switch to resolve my issue.
The long drive up the A9 to Inveness was the next stretch with no chance of playing catch up due to the boring 60 mph speed limit and all the average speed cameras.
Skiach came and went, but a welcome coffee saw us through to John O'Groats. 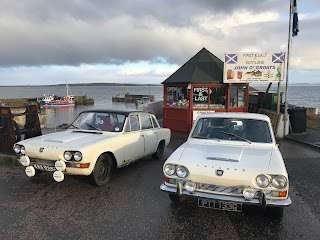 A good breakfast saw us all refreshed and then it was back to Skiach again for the next stop. We had a bit of time to play with here , so work started on Dave Matons car which had developed a misfire through the small hours. Thinking he had cured the problem, we set off again, but had to stop two or three times to try and improve the running. Needless to say, after catching up well, we were now falling behind again.
The run through Scotland was beautiful as ever although the rain did rear its ugly head once or twice.
A quick coffee saw us head down to Tebay where a hot meal in the restaurant was enjoyed.
Dave took the opportunity to take a pic of the petrol pumps with only one modern car on the pumps to spoil the view! 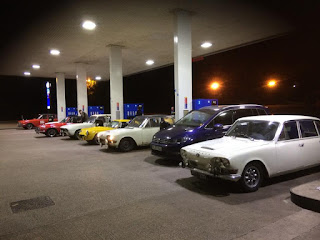 Gledrid, Monmouth and Okehampton controls were crossed off the list with just a quick stop at Okehampton to change my front offside sidelight bulb. Dave's car still wasn't running right, but he was putting up with it rather than work in the dark.
Lands End was a welcome sight although the queue for breakfast wasn't. If we had known how long it was going to take, we would have skipped it and just carried on. 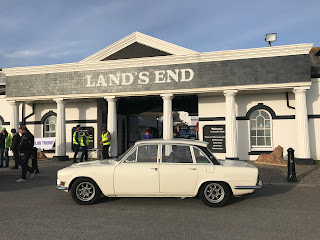 I hadn't put the RBRR stickers on my car as the paint is still fairly new, so I cut them into strips and put them across the back window. When I came out from breakfast I found that someone had vandalised them! I have my suspicions of who it was, but I'll keep that to myself. =) 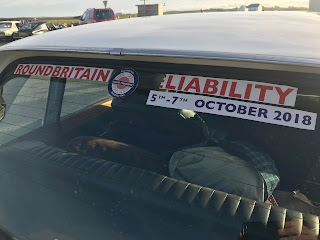 Bude Castle saw Dave changing the coil in a bid to improve matters but that proved just as fruitless as everything else that he'd tried.
By the time we left Dartmoor we were running behind again and hoping there would still be some cake left at the Pimperne stop. ( I was in more need of coffee actually!)
We made Pimperne just before closing time, but then had the long drive up to Brackley for the penultimate checkpoint.
By now dusk was falling and we were all becoming quite tired. The control was a quick stop & go with the desire to get to the finish now stronger than ever. Unfortunately,the drive across country to Knebworth wasn't pleasant and we arrived a lot later than we wanted to. 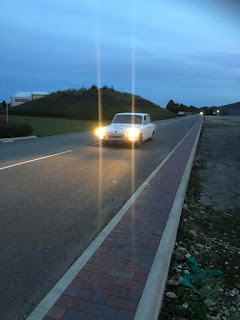 Nevertheless, the event was fantastic as usual and despite the hiccups was enjoyed by all. As I write this Dave Maton has now finally sorted out all of the issues with his car. Considering it had had no preparation for the event at all, I thought it did bloody well despite its issues.
Richards car was recovered to mine on the Monday after the event where it was fitted with a good second hand fuel tank.
The issue? The tank had been treated with some fuel tank sealer, but for what ever reason hadn't taken or stuck to the metal, so it had pealed off like strips of old wall paper and blocked the outlet. 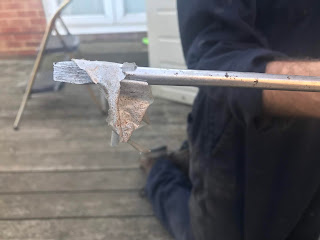 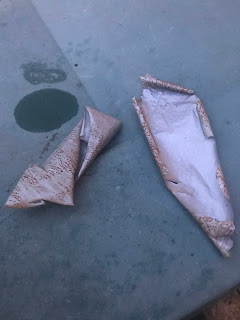 The Round Britain for me in the Pi was a great success with only the brake light switch and side bulb giving out. MPG wasn't too bad either and the car never missed a beat the whole trip. The only time we opened the bonnet was to check the oil and water. A brilliant event with great company and as usual, I cant wait for the next one.


Posted by RadSpeed Racing at Sunday, October 28, 2018 No comments:

Saturday June 30th was the show day for the Triumph 2000 Register National Day at Whitehills Country Park in Paignton, Devon.
Due to other commitments I couldn't spare a few days away, or even the whole weekend there, so I decided to just make a day of it. I know it's along way to go just for the day, but the event was celebrating 50 years of the Mk1 Pi and the organisers wanted to try and get as many there as possible. So, seeing as I own a Mk1 Pi, I thought I would make the effort.
Richard Warr decided he fancied going so he came down on the Friday night and stayed at mine. We settled for a curry with just a couple of beers knowing we had an early start the next morning.
We left my house at Leigh On Sea, Essex at the ungodly hour of 4.40am and after a quick top up of fuel were soon on our way. We did plan to knock a good chunk off the journey before stopping for breakfast, but we were having such a good drive in the sunshine and before we knew it, we were pulling up on the site at Paignton at 9am.
We received a warm welcome from club officials and were given pride of place on the front row where the Mk1 Pi's were to be lined up.
Breakfast was next on the agenda and very good it was too. Lots of cars were starting to arrive and we both enjoyed meeting people we hadn't seen for a while.
There were some beautiful cars there and some very original Mk1 Pi's as well. 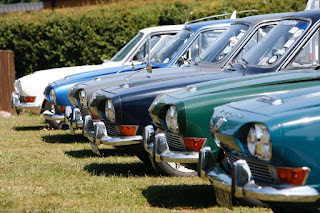 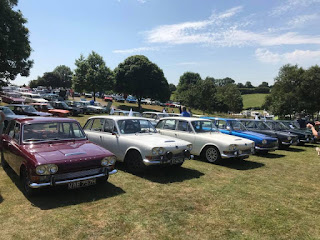 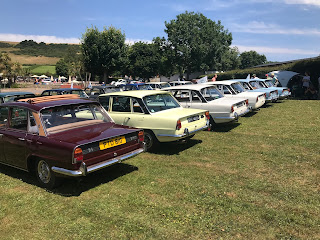 The weather was absolutely glorious and it was a fantastic day all told. I think in total there were over 80 cars in attendance and an unbelievable 14 Mk1 Pi's. I said to Richard that this event was worth coming to as this would probably be the last time we will ever see that many Mk1 Pi's all in one place.
I was really pleased with my Pi. It was a blistering hot day and she performed well. We left around 5pm and with some spirited driving made it home at 8.45pm
The round trip was 488 miles in total and we reckon we had used approximately £90 to £100 in fuel. Not too bad considering we hadn't exactly been hanging about.
The 2000 Register National Day is up in the North East next year. Another day trip?  Hmmm.....might be a bit too much that one. We shall have to see. =) 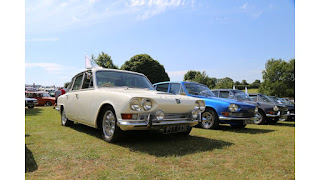 Posted by RadSpeed Racing at Sunday, October 28, 2018 No comments: