After many late nights of tidying up bodywork and fitting other requirements to ensure a pass at scrutineering, (2kg foam fire extinguisher, emergency windscreen hammer, seatbelt cutter, battery terminal covers etc,) Gertie was finally ready for this well known event. (So I hoped)
Scrutineering takes place on Friday night and Saturday morning, but with this being my first time on the event I decided to go on the Friday night. That way, if anything failed, I at least had a bit of time that night to correct it.
The car passed scrutineering with only an advisory to put gaffa tape either over the spotlights, or inner headlights. (MSA regulations state you are only allowed four forward facing lights)
With this completed, I headed back home to Essex for a good nights sleep before the following day's activites.
Colin Wake arrived at my house bright and early the next morning and by 07.30am we were entering Kent via the Dartford Crossing. The weather was expected to be good and we were hopeful of a fun (But long)  day out.
After signing on we the left the start location to go and test the measured mile. We have to do this to ensure the trip meter is in calibration with whoever measured the mile from the road book. With this done, we took on more fuel and then headed back for a coffee and a bacon sandwich and waited patiently for our 'car away' time.
At our designated time, we left the hotel and navigated our way to Mereworth Woods where we were to take part in five tests. These test courses are similar to Club Triumph's autosolos, only you are allowed to have your navigator on board and are in the woods, or fields, or farm yards! 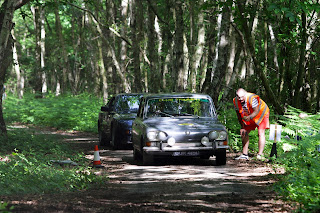 Start of Test One in Mereworh Woods.

Competition is fierce on these events and there are lot of cars that are professionally prepared for just these type of rallies, so you just have to do your best and try not to make any mistakes 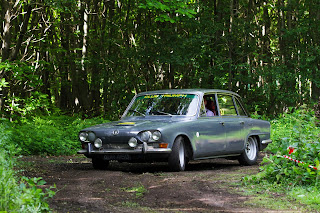 After test five we ventured back onto public roads for the regularity event. This is where you have to try and maintain an average speed at all times. (Easier said than done!) . Check points can spring up at any time and when you are least expecting it, so you really don't want to be too many seconds behind or in front because your time is recorded as soon as you enter the check point.

After this regularity it was time for test six at Hononton Farm which turned out to be quite a quick course. This was on tarmac and concrete and in and out of farm buildings, so lots of tyre screeching was the order of the day. 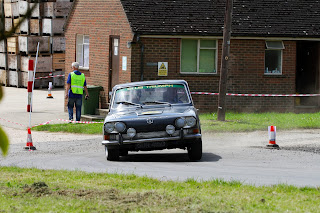 Three more regularity sections followed this and then we were off to a well earned lunch at Hole park, but not before doing another test. We made some minor repairs whilst here as one of my seat runners had snapped on one of the tests. (I always said those Triumph seat runners were crap!)
After lunch we had to complete another test at hole park, although we couldn't see the vehicle that lined up behind us getting a very quick time! 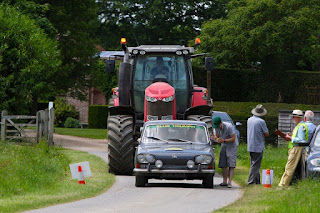 Another regularity section followed before heading off for another test at Brockton farm. This was probably our slowest test yet as our standard road tyres just couldn't cope with the loose surface. Most of the time was was just spent wheel spinning and trying not to over rev. (See below) 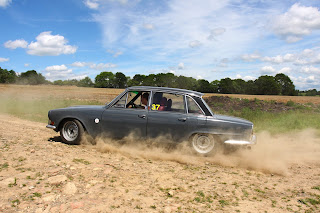 An Afternoon coffee break followed at a transport cafe on the A20 and then it was time for the last two regularity sections, one of which was Mereworth woods again. Great fun was had around the woods although the last section seemed to confuse everyone and we met two cars coming towards us looking for the exit. 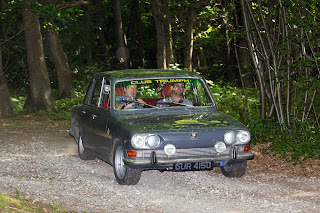 After a long day, it was time to head back to the hotel for dinner and results and it was whilst we were at the hotel that we discovered we had picked up a bullet in the tyre from Mereworth Woods. (It's used for MOD excercises as well) 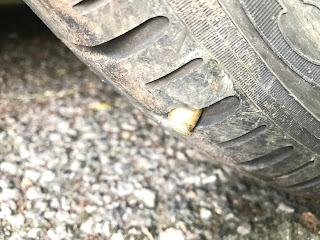 The tyre was still inflated, but we decided not to chance it and changed it in the hotel car park rather than the hard shoulder of the motorway if it did let go.
It had been a long day and Colin and I were feeling quite exhausted. We had been on the go for about 12 hours by this time and still had to drive home.
We did quite well though and finished 3rd in class and 22nd overall. Not bad considering some of the other cars we were up against that had obviously had some serious amounts of money thrown at them.
Posted by RadSpeed Racing at Sunday, June 25, 2017 No comments: