Sunday 22nd May. Washing and Polishing!

No real major work to do this weekend, (well there was a bit, but I couldn't be bothered!) so I was just faffing around in the garage really. I had to change the tyres on the front of the rally car ready for the Scottish rally in a few weeks, but that was all really.

Saturday evening I decided to give the estate a good wash, which looked good until the poxy blossom tree shed its load all over it on Sunday in the strong winds! 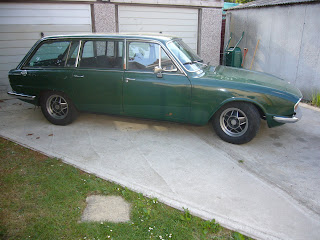 Sunday afternoon was spent T cutting and polishing up the race car. I haven't done this since I've owned the car, and where it was off the road for so long and used as a table/workbench all manor of oils, fluids, grinding dust, welding gas, tea, coffee and bovril (in the winter) had been spilt on it! 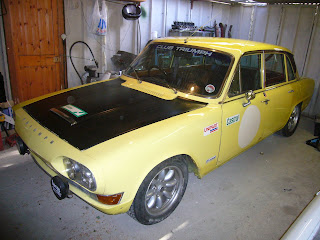 This took some time to do, but seeing as I was listening to the last day of the premiership on the radio and listening to the excitement of five teams trying to avoid the relegation from the league, the time seemed to fly by. By the full time whistle (of the football) the car looked quite good. Shame its not all one colour! 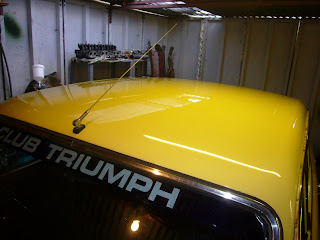 I spent most of Saturday trying to undo a seized and rounded off oil filler plug on the gearbox in the hope that I could top up the gearbox and resolve the overdrive issues. (Sometimes, the gearbox being low on oil stops the overdrive from switching in) Anyway, eventually I managed to get said oil filler plug undone, topped up the gearbox oil and took the car for a test drive. And........it's still didn't bloody work! I was now running out of time as I was going out, so it was left knowing that Dave was coming round the next day. 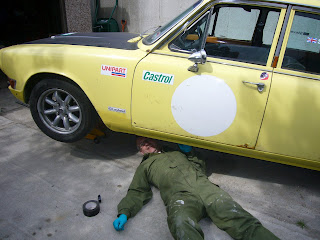 Once again, the inhibitor switch, solenoid, wiring and contacts were checked and double checked again and found to be all ok. It was only when we pulled over on a test drive and heard the relay under the bonnet clicking ten to the dozen that we realised the problem wasn't where we had been looking. A return to the garage saw replacement of the offending relay and yet another test drive took place, only this time a successful one! The overdrive is now fully working with no issues. About bleedin' time!

With the overdrive finally sorted Dave turned his attention to getting the spotlights working and fitting relays as well to reduce the load on the switch. The spotlights wasn't wired in when I bought the car and with all the other work going on haven't been a priority to be honest. However, with the time slowly creeping forward to the big rally in September, it was decided to get them done. 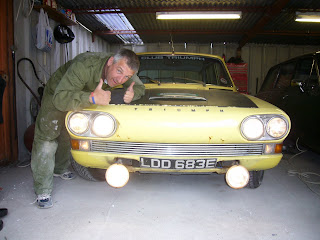 (Not sure if Dave's pleased with the work he's done in this shot or that he's now finished and can go home.)
Posted by RadSpeed Racing at Sunday, May 15, 2011 No comments:

Taking yellow for an MOT a few weeks back revealed a short in the overdrive switch somewhere which resulted in 12 volts being shot straight up my left arm and into my fillings rather than going to the gearbox where it should do!
Me being a severe hazard to anything electrical meant Dave being blackmailed into coming round and using his electrical wizardry! The first place of investigation was the actual switch itself and I persuaded Dave to take up the position that I was in the week before when I got the bolt from the offending electrics. i.e. one hand on the metal door handle and the other hand on gear lever, while he flicked the overdrive switch in with his thumb. He did say to me 'I wont get a shock from this will I?' to which I replied 'no of course not Dave'! Obviously, after jumping several feet in the air and all of the hairs in his nostrils smouldering, he realised I was lying! (What a fool, he should know me by now! :-) ) 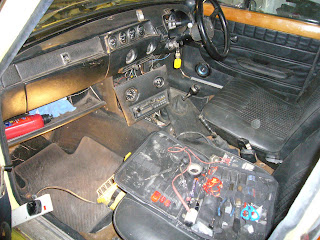 After various investigation and tracing of wiring to decipher what was working and what wasn't we then got the unique situation of losing all electrical power completely! No ignition, no interior lights, no clocks, no nothing! By now it was 6pm and Dave had the grumps anyway because he had a migraine, plus his other half had already sent him a 'Your dinners in the dog' type text. (Better than some of the lunatics I've been out with! I'd have more likely got a text saying 'your Dog's in your dinner!)
In fact, I knew he had the hump earlier when he was trying to explain some electrical workings to me that I just couldn't get, and he gave up and he told me 'F*ck off indoors and go and make the tea!'

Anyway, Sunday morning at 8am, I went back into the garage and after half hour of searching I found that a main wire in the loom had been cut into and rejoined with a scotch lock wire connector, but had come out. The offending wire was rejoined properly and all power was restored. Happy!
I then had a couple of hours off to go to the Battlesbridge Classic car show, but was back home again by 3pm to resume work on the car. Further delving underneath revealed that the inhibitor switch bracket (See pic below) had lost a bolt and was hanging down from the back of the gear selector. Therefore, the rod that is supposed to make contact with the switch when the car is in 3rd and 4th gear, wasn't touching it, so it then couldn't transmit any power down to the solenoid that operates the overdrive unit. 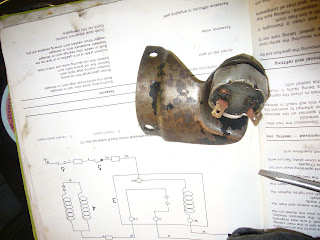 With this fitted back in it's rightful place, all appeared to be working well. I was still waiting for new gearbox cross member bolts to arrive, so I couldn't take the car for a test drive to see if it was working properly.
The bolts arrived on Wednesday and were fitted and Dave came round to join me for a test drive. The overdrive worked! Yay! for all of two seconds! Boo! A return to the garage revealed a faulty switch in the gear lever, so a new one from my spares tray was fitted.
The second test drive failed too. It was trying to come in but couldn't go in properly. The overdrive now appears to work electrically, but not mechanically. I haven't checked the gearbox oil levels in this car yet, so that will be this weekends task. I'm hoping that's all it is. (Common fault)
I really don't want to be pulling the gearbox out-They are too bloody heavy! 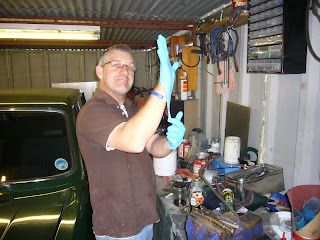 This is Dave about to perform a thorough examination, but I told him to leave next doors cat alone! Please note my immaculate and well organised work bench. Health and safety would be proud of this! :-)

Posted by RadSpeed Racing at Saturday, May 14, 2011 No comments:

Due to going to see 'Daddy' in Lowestoft yesterday, I didn't do anything on the cars, so Monday was catch up day. Or it would have been if I hadn't have been so lazy and fell asleep on the sofa all afternoon! 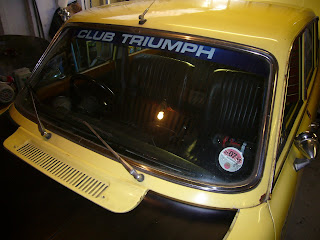 Before I did though, I managed to remove the gearbox cross member in readiness for the new bushes and also fitted the obligatory 'Club Triumph' sunstrip. Oh well, will do more next weekend! :-)
Posted by RadSpeed Racing at Sunday, May 08, 2011 No comments: