Not a good start to the year.

New Years Day- Monsoon season! The colossal downpour we had in the south on this particular day resulted in some serious floods- in my garage! I had always had a small amount of water come in through the back corner, but nothing like received on the day in question. 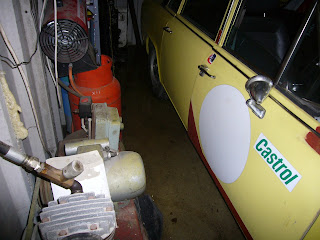 So, the night was spent removing most things from out of the garage and mopping up the excess water. I needn't have bothered though as two days later we had another immense downpour and I came home to exactly the same! 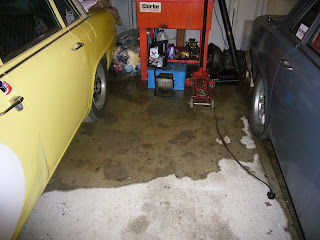 To prevent this happening again, I have had to have a large drainage channel dug round the outside of the garage so that when we do get severe rain, it now has somewhere to go. Needless to say, this has taken the focus (not to mention the money) away from the cars, so not much has been done.
The only thing I have managed to worth mentioning is have Gertie's TR6 wheels blasted and painted. 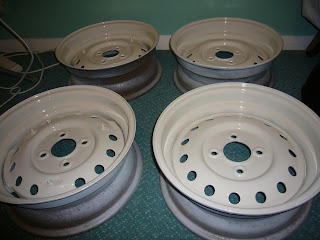 I fitted them on this weekend and managed to succeed in shearing off one of the rear wheel studs! Luckily, I had some spares in my RBRR/10CR spares box so I quickly fitted one of them so I could finish the job. 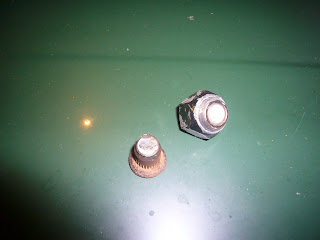 Other developments on the car front are....-well, not much really. The engine I dropped in at the engineers before Christmas is still being rebuilt. One of the rings had picked up on one of the bores and badly scuffed it, so a rebore is needed.
The estate is due MOT in March, but before then I need to cure my 'wandering' steering. It was an advisory last year and I've still not done much about it. I have a spare rack in my garage of condition unknown, so this will soon be investigated and prepared for fitting.
I also seem to have a clutch master cylinder that still seems to let air into the system somehow. I keep losing pressure while driving (especially in traffic) and can feel the biting point getting lower and lower. It then starts getting hard to get in and out of gear until I pump the pedal a few times and then all is well. Countless bleeding has not found any air trapped in the system, so it's all a bit of a mystery at the moment.  ﻿
﻿
Posted by RadSpeed Racing at Sunday, January 29, 2012 No comments: