With the Pi collected and out of the way, I now had to get moving to meet my friends Russell & Jan whom I was going to spend the day with at the Chelmsford Motorfest.

After making a flask of coffee and loading the sun lounger chairs in the boot I set off for our meeting point at Ingatestone Saddlery. I was there first, so I made use of a quick photo session. 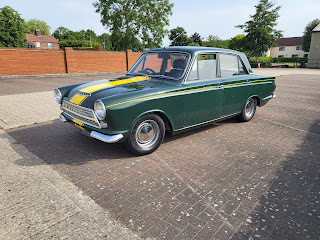 Russ and Jan arrived soon after and we set off for the show. It wasn't a bad turn out, although there did seem to be a lot of modern stuff there. I have to say, I was overwhelmed by the amount of interest that the Cortina was attracting. Lots of people were taking photos of it and it was certainly a large point of discussion. I think Russell was a bit put out as nobody was even remotely interested in his Porsche. =) 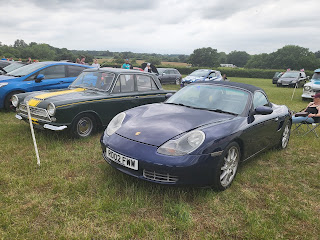 I was a nice chilled out day and around 2.30pm we decided to make a move. I was enjoying my first proper day out in the Cortina and having a great drive home, but then all of a sudden I changed gear, there was a loud bang and the clutch pedal dropped to the floor. This car is fitted with a type nine 5 speed gearbox and therefore has a cable clutch instead of the normal hydraulic. Unfortunately, the clutch cable had snapped. It was annoying because I'd even said to my mate Dave 'I need to get a spare clutch cable and keep it in the boot'. I just hadn't got round to it. I rang the AA at 14.50 and they were so useless, they didn't get anyone out to me until gone 6pm. I even explained to them that I was on a single carriageway and a blind bend where cars were having to go on the wrong side of the road to get past me. They said they made me priority, but it would still be three hours. Well that's not my idea of priority! The AA used to be really good and you never had to wait long, but now they have cut back on vehicles and staff they are quite frankly.......shit!
Anyway, the recovery guy (a sub-contractor) eventually arrived at 18.05 and loaded the car onto his truck. Luckily he didn't dawdle and I was home by 18.40. It was a pity that the Cortina's maiden voyage ended this way, but hey ho, that's the joys of running old cars. Looks like a trip to Burton Power products is on the cars Monday morning to buy a new clutch cable! 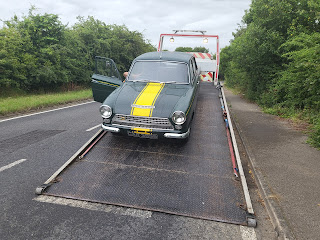 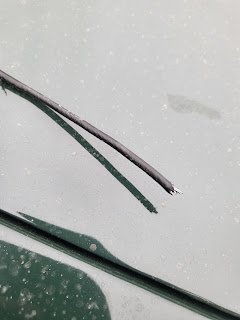