Tuesday June 14th. A day out before work!

I received a phone call from my good friend Colin on Monday morning asking how well I trusted the Cortina estate I had bought at the auction recently and if I was up for 'taking a chance'. I asked him why and he said that his first job in the morning was at Kings Lynn (Where I had won the Cortina in the auction) and he could give me a lift there if required and I could drive it back. I said I would think about it and get back to him.

I also rang the transport company that the auction house uses and left a voicemail, but they didn't even call me back. I also put the job on the Shipley transport services website, but the cheapest quote I had was £209 and they couldn't say when they could do it. I only had until Friday 17th to collect the car and after that, I would have to pay storage charges. So, I rang Colin back and said 'ok, let's go for it'.

Very early Tuesday morning saw me driving my blue Triumph up to Colin's. With my recent purchases I'm now up to 5 classic cars and have run out of room, so Colin is going to look after this one for me for a while.

We left Colin's at 7am and ran into trouble straight away due to the A14 being closed! We bobbed and weaved across country and eventually managed to get back on our intended route. We finally reached Kings Lynn an hour later than planned.

Once at the auction house I presented my receipt and we were led out to the Cortina. We checked the oil and water and then had to get it jump started. (not a surprise for a car that's been stored for some time and just shunted about occasionally) Colin and I both then went to Tesco's to fuel up and then went our separate ways. I had a 94 mile drive to work and I have to say, the Cortina estate handled it with no issues at all. I made good time, but the lost hour cost me and I arrived at work 40 minutes late.

The next morning the car received its first wash for some time and really came up well. I have to say, I'm very pleased with my purchase and think I have got a real bargain. It's also a very early car with a bench seat and column change gearbox and it drives really well. I can't wait to give it a proper check over and start using it for the shows. 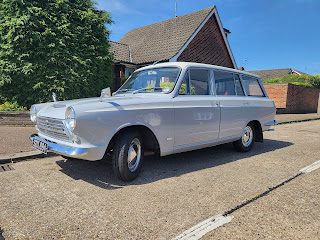 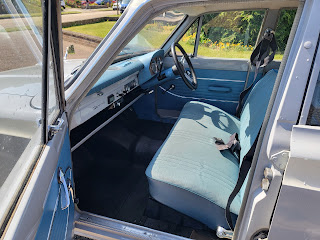 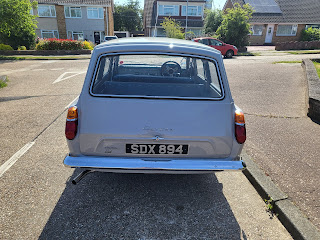 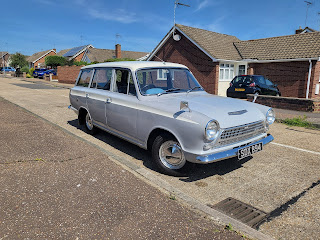