With the recent addition of two Mk1 Cortina's space was becoming a premium and I decided that something had to give.

I did a lot of thinking and after much deliberation, I decided to put my Mk1 Pi up for sale. However, with all the modifications I've done to it over the years, if it was going to go, it had to go for the right money. I wasn't going to be giving it away.

A good friends of mine in the Triumph world always knows of cars for sale and people looking for cars, so he was given all the details and took up the challenge to find me a buyer.

The first person he found for me seemed interested, but when it come down to it he just didn't want to pay the money and seemed to be stalling and hoping it didn't sell and wait for the price to come down. (Which it wouldn't have)

The second interested party was sent lot's of pics and the spec sheet for the car and within a few hours had paid a deposit through bank transfer. Early Saturday morning, they arrived with a car trailer, had a quick look around the car and paid the balance there and then. They were pleased with the car and I was pleased with the price, so everyone's a winner.

I've had some great times with this car, but as of late, just haven't been getting the buzz from driving it anymore. So I've no regrets and I'm glad its going to a good home. 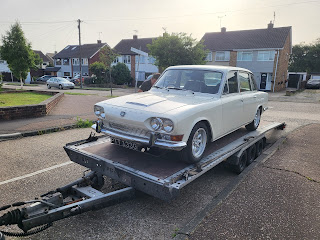