Now that I've completed a few trips and days out in the Pi, I reckon the engine has now covered enough mileage to be considered 'run in'.

So, early Saturday morning I was out in the garage where the first job was to re-torque the cylinder head. I also took the opportunity to have a good check over the engine and components after its recent rebuild and pleasingly nothing appeared to be untoward. So with the tappets reset, the job was completed in good time.

The next job was to re-attach the mirror that I had knocked off the previous Sunday and this time I made up some more sturdy fittings for it, so that they shouldn't come off again so easily.

Another outstanding job was to try and cure the slight vibration that I get at high speeds. The diff has been built several times on this car, so that shouldn't have any problems. However the quill shaft bearing in the front part of the diff hasn't been replaced for a number of years now, so I decided to replace that. With the diff removed I then replaced the quill shaft bearing and went to fit a new seal in the diff. I removed the old seal (which has to be butchered to get them out) but when I went to fit the new seal, I found that the replacement was too small and therefore obviously incorrect. Bugger! I was really cracking on as well and it still wasn't even lunch time. I'd been hoping to at least have the diff mounted back in the car and maybe even finished by the afternoon. (Then I could play with the Cortina on the Sunday) I will now have to wait until the correct seal comes through the post before I can continue. A bad end to a good start!. 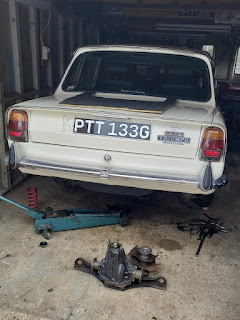