Seeing as we hadn't been out for a while, Gavin and I decided to have a leisurely drive over to Wallasey Island. It's not that far, but far enough to get the temperatures up on the cars and the roads going over there are twisty enough to test acceleration, braking and suspension. 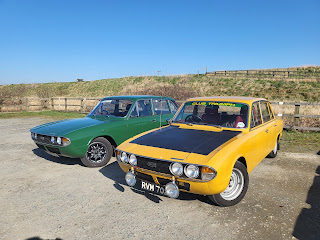 The drive was fine but the wind was a cold biting one that made us not want to stay too long. Plus, I was going to a footy match in the afternoon as well so I couldn't stay over there all day.

Both cars performed well although I did have an annoying rattle from the exhaust on tick over, but I know what that is anyway and it's on my 'jobs to do list'. 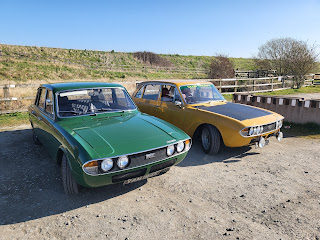 The other reason for the drive out was to test the rear suspension on my car. Since owning the car I'd noticed a 'clonk' when pulling away and a metal rattling sound behind my right ear when driving. Almost as if the off side rear door wasn't shut properly and was banging on the door shuts. I wondered if the clonking was the propshaft and so inspected that, but could find nothing wrong there. I then decided to check the rear suspension bush. It turned out this was exactly what the problem was. The bonding between the metal and rubber had failed and the bush was collapsing and providing excessive movement. 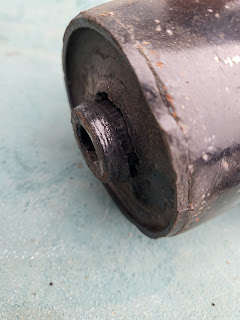 So I replaced this bush with an old genuine Triumph part that I had in stock. I then decided to check the other side and found that this had started to fail as well, but wasn't quite as bad. Needless to say that one was replaced as well. and I now have a rattle free and clonk free car.