Since buying the Mk2 triumph last October I've found that I've had to crook my neck when getting in and out of the car. The previous owners (team Rusty Custard) had fitted MG ZT front seats which although very comfortable are absolutely huge! They have you sitting quite close to the door and also in a higher position that I'm used to as well.

I decided to look for a set of Alfa Romeo 156 seats which I have now found although they are up in Mansfield. They will be collected some time soon by Dave Harvey (He doesn't live that far away from Mansfield) and he will bring them down with him the next time he visits. In the mean time Dave Maton still had the original seats from Gertie in his loft and offered to loan me them, so I collected them Saturday morning and attempted to fit them in the afternoon.

After removing the MG ZT drivers seat I stumbled across a problem. There had obviously been some problems involving the floor pan in the past and repairs had been carried out. The problem was that new metal had been welded over the top of the captive nuts where the original Triumph runners would have bolted in. 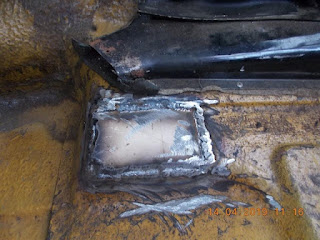 It was at this point that it also started raining so I took that as a sign that I wasn't meant to get this job done today and locked up and went indoors.

Sunday morning saw me playing musical cars so that I could get the Mk2 into the garage. With the drivers seat and carpet removed I then got an old seat runner and bolted it into place using the front bolt only. I then positioned the rear of the runner to where I thought it should locate. I then drilled a small hole through the repair panel to see if I had found the position of the original hole of the captive nut. Luckily I had, so I moved up to a bigger drill bit drilling very carefully so I didn't damage the thread underneath the repair panel. I then tapped the hole with a 5/16th tap to clean up the original thread and then tried a seat bolt to see if the runner would bolt down and hold tight. It did! Success!

I then had to do the same to the repair section on the side near the sill and luckily this went just as well as the first one had and before long I had the Alfa seat bolted into position. The passenger side had had no such repairs done to it, so this seat fitted straight in with no issues. The seats aren't the correct colour, but as I said I have only borrowed them until my ones arrive. 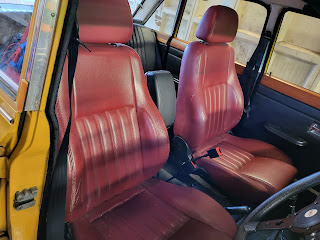 While the car was in the garage I carried out a couple of other repairs to the windscreen washers and improved the earthing to the electric fuel pump and with that done, I called it a day. Quite a successful morning all told.