With my mate Gavin recently converting his Mk2 Triumph to injection, I jumped at the chance to buy his re-needled HS6 Carburettors and Pipercross airfilter that he once had fitted on his car. This allows more fuel and air to get into the carbs and a recent rolling road session was proven to increase both brake horse power (BHP) and Torque.

Another friend of mine analysed the camshaft that is in my engine and compared it to the camshaft that was in Gavin's engine and declared that my car should run ok although some minor adjustments may be required. So, armed with this knowledge my carbs were removed and the new ones fitted. 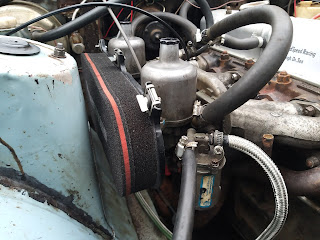 A test drive was delayed by a clutch slave cylinder failure, but once this was replaced we were able to get out and have some fun. It's definitely increased the power although the car is quite lumpy at low revs. It's certainly driveable though so I will persevere for now and get it booked in for a rolling session sometime in the near future. I'm very happy with the increase in performance though and it frees up a bit of space in the engine bay as well. Oh yeah, and it sounds bloody good as well! 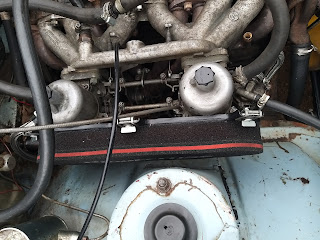