What should have been the 2020 RBRR was finally taking place a year later due to the pandemic causing chaos to everybody's lives. A lot of us had been preparing for this event for what seemed like years and then all of a sudden a week before the event we have a fuel crisis! My area had been hit particularly bad with the fuel shortage and as of 2pm the Thursday afternoon before the event, I couldn't even get enough fuel to get to the start let alone drive 2000 miles across the length and breadth of Britain. My co-driver from Derby who would normally have come down on Thursday afternoon, hadn't been able to get fuel either, so things really weren't looking good.

Luckily I received a phone call from a friend informing me of two petrol stations that had just had a delivery, so I quickly jumped in the Triumph and was able to fill up with fuel. My co-driver had also managed to get fuel so we were now back on. Friday afternoon I met up with the other drivers and co-drivers at a carvery in Stevenage for a last good meal for a few days. We were running as 'Team Spotlight' with three Mk1 Triumph saloons all fitted with 2.5 litre engines instead of the standard 2000's. (Although my engine is bored out to 2.6) 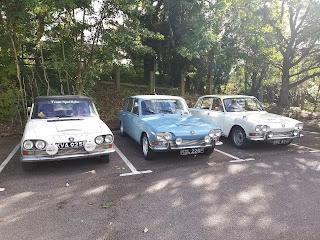 After spending a few hours catching up with old friends at the start at Knebworth House our 6pm departure time soon arrived and 120 Triumphs set off into the night. We headed north up the A1 towards the first control at Wetherby Services in North Yorkshire. We had heard that there was a limit of £45 on fuel, but luckily we managed to find another petrol station on the A1 with petrol and no queues so we filled up there as well.

After having the road book signed we were quickly back on the road to head for the second control at the English/Scottish border at Carter Bar at midnight. This was only a drive through control and we had a trouble free drive up to the next stopping point at Kinross Services in Scotland for around 2.30am. 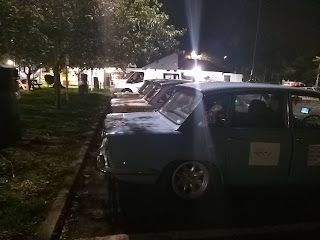 The long hard drive up the pitch black A9 to Inverness was the next bit and this is where the sleep deprivation normally kicks in. Skiach Services at Allness was the next stop and by now were hitting the coffee to keep awake. We managed to top up with fuel again and started the drive up the North East coast road to John O Groats for a well deserved breakfast at 8am. 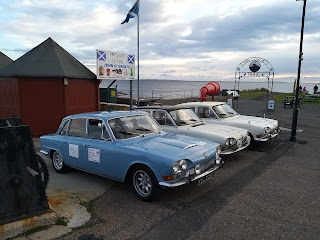 Breakfast was a long drawn out affair due to Scotland still being under covid restrictions and social distancing and masks etc still applying. Therefore the restaurant was at 50% capacity and the queues were coming out the door. we eventually got away after about an hour and made our way across the very top of Scotland through Thurso and Bettyhill and towards the next control at the Falls of Shin. We decided that we were ahead of schedule, so we pulled into a layby and made a cup of coffee on Richards cooker. The time was now 11am 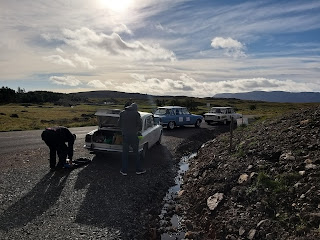 Feeling fully refreshed we made a quick stop at the Falls of Shin to get the book signed then made the long journey down past Loch Ness, Fort William and Glencoe. At this point we were having no trouble getting fuel and the only thing that seemed to be against us was the weather. The normally beautiful Glencoe was being assaulted by win ds and rain that can only be described as 'Biblical'!
After what seemed like an eternity we eventually arrived at our Saturday tea time control in Gartcosh in Glasgow. A very quick stop here and we were soon heading back down the M74 towards England and the next control at Tebay services on the M6 in Cumbria.
It was by now around 9pm and the other two crews decided to stop here for a hot meal, but my co-driver, Dave and I didn't want to eat, so for the first time in the trip the convoy split up and Dave and I said arranged to meet back up with the other two crews at the next control in Gledrid.
This we did and the three Mk1's ran together again from Gledrid to Monmouth for the next stage. Our next control after this was  Oakhampton in Devon and we arrived around 6am. We'd already been told that there was no petrol available at this stop so we stopped at Exeter services and got some there. Lands End was our Sunday morning breakfast stop and we also managed to find a Morrisons near Penzance and filled up with fuel there. A good breakfast was consumed at Lands End and with another photo session done, we were on the road again at 09.25am 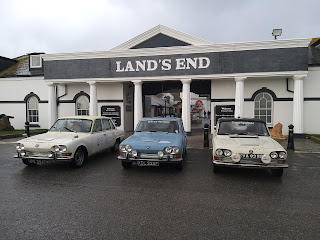 Bude Castle for 11.30am was the next check point and by now we are always heading homewards.....sort of!. A lovely cup of coffee was on the agenda and a good chance to meet up with some of the other crews and have a brief chat. The rain was still with us as we headed to our next control at Badgers Holt, Dartmoor. We didn't stop long at all at this one as we were all now desperately tired and and just wanted to get on. From Dartmoor we went to the Haynes Motor Museum at Sparkford for the penultimate control. By now the rain had stopped, we all had enough fuel to get back and the sun was shining. Life couldn't be better. Amazingly, we even had a clear run up the M3 and around the M25 and all pulled into the finish at Knebworth together around 18.50 and in the same order that we had left. 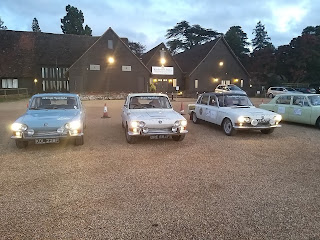 Despite all our fears and worries due to the fuel shortage, it had been a fantastic run and all three cars had performed faultlessly. At time of writing this we (team Spotlight) have also raised £595 for MNDA and Club Triumph as a whole has raised over £77K. A fantastic achievement from all involved. Here's looking forward to the next one!