I finally had some time off work, so good friend Dave Harvey came down for a few days and while he was here we cracked on with the engine install.

Dave arrived on Tuesday evening so we made a start on the car Wednesday morning. Gavin also came round to help. We had a bit of a late start on the Pi as we were messing about with the Mk2 first which was still suffering from starting problems. It turned out the choke mechanism wasn't working at all hence the poor starting. On the Pi engine we fitted the flywheel, clutch a new thrust bearing and fitted the new engine into the car.

Thursday morning saw the slave cylinder, starter motor and cylinder head reinstalled. The front axle was also re-secured. (You have to loosen this and bounce the car on its springs to allow the sump to drop over the front beam) The oil cooler was then fitted complete with new pipes, then the alternator, fan, fan belt and throttle bodies. The temperature in the garage had by now dropped considerably so we called it a day.

Friday morning saw the fitting of the metering unit, injectors and distributor and after a few false starts the engine finally fired up and ran. After a few more fine adjustments  it was running well and sounding good. Which was quite a relief with all the money spent. 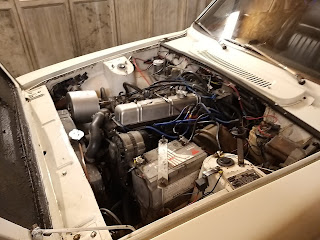 This is the first engine change I've done on a Pi and I was surprised how much longer it takes compared to a carburettor set up. There's so much more setting up to do. However, I'm really pleased it's now done and I'm really grateful to Dave and Gavin for their help.
When I bought this engine I was amazed to find that it had been rebuilt before and that the block had been bored out and had plus 60 thou pistons fitted. It was an incredible coincidence because my other Mk1 had had exactly the same thing done to that. So I'm now in a unique situation of having two Mk1 saloons both with 2.6 litre engines as apposed to standard 2.5's.