A recent check of the oil pressure on my blue Mk1 revealed slightly low oil pressure. Knowing that the oil pump was now getting on for seven years old and had done quite a bit of mileage, plans were made to fit a new one. It was decided the best place to do this would be at my good friend Dave Harveys place, as if anything else was needed, such as bearings etc, Dave would probably have them in stock.

So, one Thursday night after work I headed up to Dave's in Derby in non stop rain and poor visibility. It was a clear run though and I arrived in time for Dave and I to fit a couple of pints in at his local.

We made a good start on Friday morning and pretty soon the front axle had been removed and the sump was off. 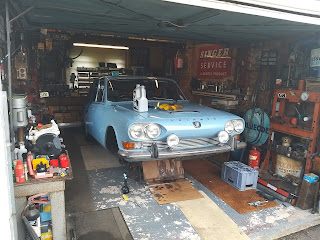 The engine and crank looked very clean, (Testament to regular oil changes using good quality oil) but even so we decided to check the big end and main bearings as a precaution. The mains and the crank were ok, but we decided to fit a new set of big ends just for safety sake. 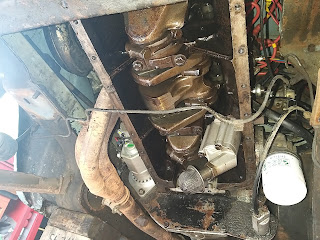 By late Friday afternoon the new oil pump, new filter and new PRV were fitted, the sump had been cleaned (we also knocked out a dent I'd put in it when I was rallying) and were back in place. Pleased with our days work we enjoyed a night out in Derby town centre as a reward.

Saturday was a slower day (must have been due to the night before!) and all we had to do was refit the new steering rack and track rod ends. We also carried out a thorough inspection of the car underneath which has left me with a few more jobs to do before the RBRR in October. We also noticed that the radiator was leaking slightly as well, which will mean repair or a re-core.

Saturday night was a quieter night as I wanted to get away early Sunday morning to beat the traffic on the M1, but we still had a good time in Dave's local. Sunday morning and I was away by 09.30 and had a fairly clear run. Once again I had non-stop rain for company until I reached the M25 and I only stopped once just off of junction 26 to meet Dave Maton and drop off some parts to him that he'd bought from Dave Harvey.

All in all, a good weekend. New Oil pump, new big end bearings, new steering rack. A good step forward towards the RBRR.