Luckily, before Boris decided to put us all in lockdown, I had planned a trip up to Derby to see Dave Harvey. Whilst on the visit I picked up a new camshaft, new camshaft and crankshaft sprocket, timing chain and a few other goodies. 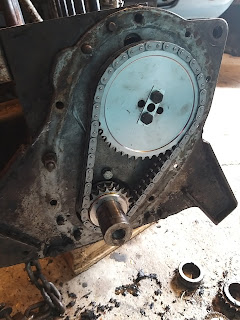 Over the past month or so and while work has been quiet and also not being allowed out, the camshaft has now been fitted. (Including being dialled in properly) A small issue involving the  head gasket meant the cylinder head had to come off again, but other than that the car is now up and running again and sounding good.
All we need now is for this awful current situation to end so we can try and get some kind or normality back into our lives. Neither Triumph has been out since this all started and it's amazing how much you miss driving them. Here's hoping that will end soon..... 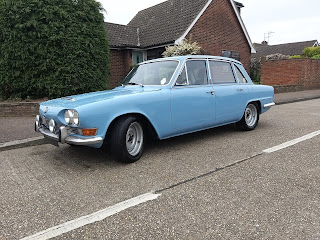 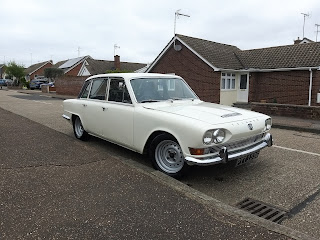 A few weeks back, once I had all the parts, the cylinder head and all the new goodies were fitted. Once again helped by Gavin and Dave, the job didn't take long and pretty soon, we were ready for start up.
Unfortunately, start up didn't go well and we were greeted with a horrendous clacking sound that none of us could figure out where it was coming from.
We swapped the rocker shaft with an spare one in case it was something to do with the new rockers or rocker shaft that we had fitted, but this made no difference. with a feeling of dismay we shut the garage door (It was now approaching 6pm) and gave it up as a bad job.
The following Saturday, we started with a compression test and all cylinders turned out to be fine. We tried a few more things, but the more we investigated, the more evident it was that the head was going to have to come back off.
With the head removed and investigated it was clear that the problem wasn't cylinder head or valve based either.
Looking down one of the cam follower holes, it was looking like we had some serious wear on one of the lobes on the camshaft. Unfortuately, this being a Mk1, you can only remove the camshaft by removing the engine. (You cant get the camshaft out the front of the car because of the nose cone. You can on a Mk2, because of the bigger front grill)
So, seeing as there was three of us on hand, we removed the engine. 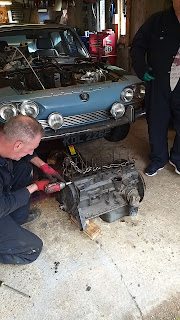 We then set about removing the camshaft and sure enough, the wear on one of the lobes was excessive to say the least. I think the previous problems with the valve seat recession had masked it, and now that everything was as it should be, was now highlighting the lobe problem. 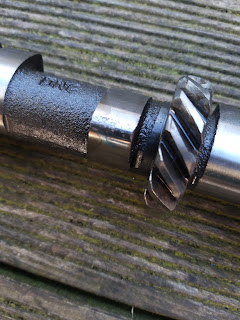 So, fast forward a few weeks, I have now purchased a new camshaft and fitted it. I've also purchased a new timing chain, crankshaft cog and spacer and camshaft sprocket. The engine is also back in the car now, but it still needs to have the head and everything else refitted. Hopefully that will be the end of the current problems. 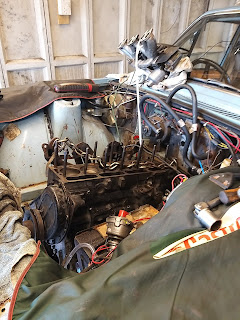 Posted by King Rat Racing at Wednesday, March 18, 2020 No comments:

For some time now Gertie's engine that is now fitted in the Blue car has been running hot. Even in minus temperatures and with a 75 degree thermostat in it!
The sender unit, water pump, radiator and thermostat have all been changed in an attempt to cure the problem, but none had been successful. I even changed the temperature gauge in case I was getting a faulty reading, but no such luck.
The car also hadn't been running right for some time and had lost its 'smoothness' that no amount of tuning could cure. (Even purchase of a 123 Tune distributor)
In desperation a decision was made to remove the cylinder head and check the head gasket just to see if this was our problem.
So, one cold morning in December, fellow Triumph enthusiasts Dave Harvey, Gavin Leggett and myself ventured into the garage to start removal of the cylinder head. 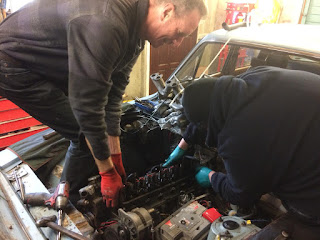 It did put up a bit of a fight, but removal of a couple of the head studs finally saw it relinquish its grip on the block and allow us to start our investigations. 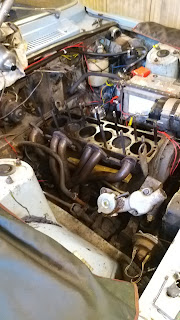 The head gasket itself turned out to be ok with no sign of blowing or leakage. However, inspection of the cylinder head discovered that the ports had become porous in places and that exhaust gases were leaking through into the waterways and boiling the water in the head. We also discovered some serious valve seat recession on the valve seats on cylinder number four.
Further inspection also found that most of the cam followers will need replacing as well. 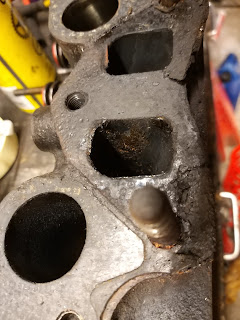 So, after a few weeks or so another head was obtained and Dave Harvey took it to Bates engineering for me where it was cleaned up, skimmed, and new valves and new springs were fitted. The valve seats were found to be in excellent condition, so no further work was required there. 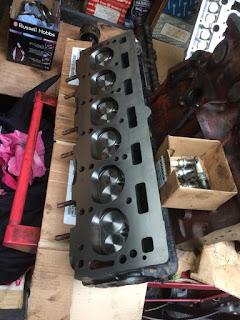 Other parts I've managed to obtain are a brand new rocker shaft and some brand new rockers, so once the head has been collected from Dave's house in Derby and I've got all of the other bits together. I'll be able to start reassembly and hopefully have a cooler and better running car again.