I've not done much work on either Triumph lately to be honest, my mind has been on house hunting and replacing my boring every day car, my Peugeot 205 diesel. Don't get me wrong, it's a great car and you can get around 60 mpg in them if driven sensibly. (Apparently!)
With the car hunting I still wanted something old(ish) but something that I can use every day, has good fuel consumption and I can also do other events in. Spares and parts availability needs to be good too so that if it does go off the road for any reason it can be repaired and put back into use pretty quickly.
After looking around at a few different options I decided the ideal car would be..........a Mini! A proper little Mini that is. Not the stupidly large German 'Mini'.
They have a great following, plenty of regional and local clubs and events and there's very little you can't buy for them.
So after looking at a number of them and weeding out the rot boxes a choice was made on a 1977 Metallic blue 850. Ideally I did want a 998cc model, but this car has a stage one tuning kit, Cooper front disc brakes, Koni shocks all round, but more importantly a very, very good solid shell. Anyone into Mini's will tell you it's better to have a good shell with the wrong engine, than the right engine with a crap shell.
It also has high lift rockers fitted, but there's no history with the car and the camshaft spec is unknown. I'm hoping it has an upgraded camshaft and that's why the high lift rockers were fitted, but who knows? It certainly flies along for an 850!
So, after some serious haggling, said Mini was collected and driven home from Chadwell Heath near Dagenham and I'm pleased to say it did so with no issues at all. It does appear that the stage one kit has been fitted, but then the carb hasn't been fine tuned to suit the new needle, so a rolling road session at Atspeed in Rayleigh is booked for Friday morning where this issue will be addressed.
Overall though it's a great little car and has the potential of being a super  fast buzz bomb! Watch this space! :) 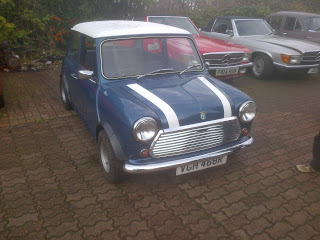 Saturday October 5th. The estate gets a Rat look!

For some weeks now the bonnet on my Mk2 estate has needed attention. I haven't been able to open or close it without it catching on the front panel and causing damage to the paint. After several previous attempts at adjusting it, all to no avail, I had come to be convinced that the bonnet was rusting from the inside of where the bonnet hinge plates are welded on.
So as a precaution I had bought another second hand bonnet just in case my one was completely beyond repair. With my bonnet removed and after further inspection, it was decided that it was indeed beyond repair and so the replacement was fitted. The good news is that the new bonnet works a treat and the bonnet now opens and closes without catching at all. The bad news is that this bonnet is Sienna Brown, with a splash of white and some yellow road paint thrown over it along with some dried leaves, bird turd, fur that looks like it's from a Badger and three spiders. (Two of them dead.) (Well what do you expect? it did come from Colin Wake. i.e Scrapman.) 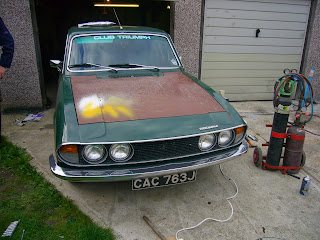 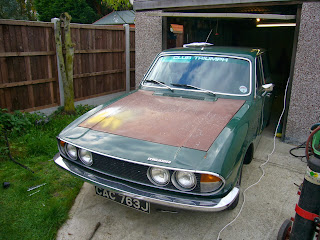 Part of the cars long term plans are to have all the bodywork taken care of and a complete respray, so for the time being I might just have to spray the bonnet matt black with rattle cans. (It'll still be better than in its present state!)
Or.....if I'm going to paint the bonnet black shall I go the whole hog and create what I had before? A Mk2 estate in the guise of a British Leyland Rally Support vehicle. I always loved the look of that car and regretted selling it. (Although it was rotten!) This is the car on the 2009 HCR. It was my first Club Triumph event. We managed to earn joint fourth place and our results have got progressively worse on this event ever since! 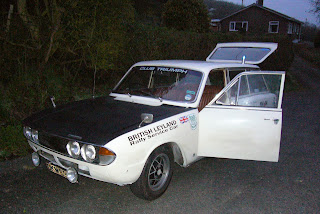 Another issue I had always had with this car was its reluctance to wear a strut brace. For some reason with a strut brace fitted you could never close the bonnet. I think its had either accident damage or restoration repairs at some point in the past and the front panels were never lined up properly. Seeing as Gavin was present and is a dab hand on the gas welding kit, he cut into the strengthening framework under the bonnet and altered and re-welded them so that they could compensate the strut brace. So for the first time since I've owned the car (Five years this New Year) it now has a strut brace. 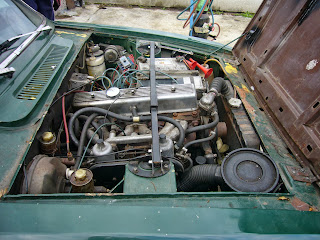