After a few weeks of collecting the missing bits for the new car and with no more other commitments for a while, I had half a day today to get a few jobs done.
The first job was to fit the manual pedal box. While doing this I also fitted the brake servo, brake master cylinder and the clutch master cylinder. I also fitted the column overdrive switch and gearstick.
I now need to make up some new pipes for the brake and clutch systems and then need to finish the brakes on the offside rear. (And fit another shock absorber) 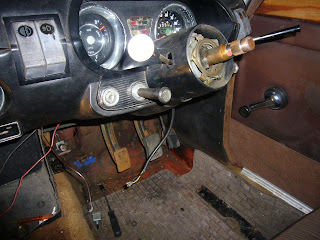 ﻿
This car will need a fair bit of recommissioning after its 23 year hibernation, but I'm hoping to get most of it done over the Christmas break.
That's if the other cars don't keep interfering of course. The daily driver BMW decided it wanted Christmas off and refused to start and run yesterday morning, so I was forced to use the Mk2 estate instead. This car has been fine since I changed the petrol pump earlier this year, so I thought its 'air lock' issue was a dim and distant memory. However, it proved that this wasn't the case by breaking down in the pouring rain! Typically, because the car had been so reliable I had taken the tools out of it a few weeks before.
After trawling a nearby market and buying a screw driver I managed to clear the air lock and get it running again. Once back home I needed to get ready to attend a party in North London and decided not take any more chances with the estate and take Gertie instead. Only to find that her battery was absolutely stone dead! Marvellous! Luckily I had a spare battery and after a quick charge Gertie burst into life and I was able to complete my journey. Bloody cars!
Hopefully, they'll be no more trouble from the other two (I'm not even going to bother looking at the beemer just yet!) and I'll be able to focus on the red car. I'm looking forward to hearing it run for the first time since 1989. 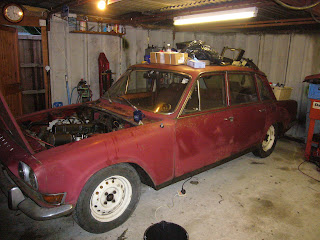 With nothing else planned this weekend I decided to make a start on the new project. The first job was to drag it out of the garage, sweep all of the leaves and dirt out of all the crevices and find out which brake was sticking and making it difficult to move.
The front wheels were removed first and after evicting a horrendous sized spider and demolishing his home the brakes proved to be free. It could do with new pads but I'll wait until the rest of the braking system is complete and fitted before I do this. (The previous owner had removed the pedal box, servo and clutch and brake master cylinder for his other car.)
The tyres on were of vintage age and all the side walls were cracked, so I've put my TR4 wheels with good Michelin tyres on for now. The nearside real wheel was inspected next and while it was off I decided to grease the driveshafts and fit my spare lowered fast road springs while it was all apart. This brake was also free so it was looking like the off side rear that was going to be the sticky one.
Sure enough the offside had a seized wheel cylinder and adjuster. I also managed to shear the bottom of the shock absorber while undoing it, so I now need another shock. Further inspection revealed a smallish hole under the nearside front wheel arch, half the exhaust missing and the paint code under the bonnet showed the car to be Cherry Red! I thought it was a badly faded Damson!
The worst part of the car is the nearside wheel arch. It will need some work to look presentable, but considering this car was last on the road 23 years ago. It hasn't faired too badly. It must have been dry stored all that time to be as solid as it is. It's a cross over between the pre facelift and the facelift as it has the upright spare wheel well, but the later type gauges and heater system. 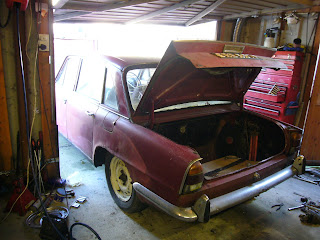 In the glove box were other interesting items which have revealed a bit of the cars history. I bought it from Hertfordshire, before that  it was puchased from Surrey, before that the car was in Derby, the previous owner before that was in Lancashire and I found a parking permit for Yorkshire! The log book also says one previous owner since 1977.
I also found a completed 'Customer Preperation Service' document with a bullet check list ticked, an operation guide for the Laycocke overdrive unit and a brochure for 'Operation and Installation instructions for Antiference Car Radio 1303. I also found a 'Tyres and your safety' brochure.
There is also a sealed envelope addressed 'Fleet users and Owners who move residence'. I have no idea what this is but the fact that it's been sealed for so many years makes me very reluctant to open it. Any ideas anyone?
Also on the windscreen is a 'Kennings' sticker. Kennings were a car and van hire company and had dealerships. They are now known as the GK group (Initials of George Kenning) and found this link quite interesting:
http://www.gkgroup.co.uk/content/10/the-history-of-gk-group
Brochures and documents found below. 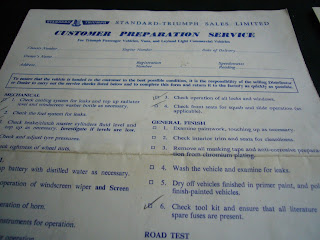 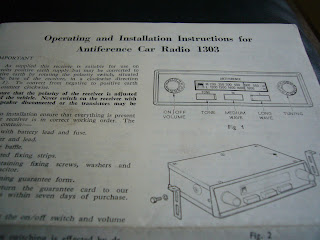 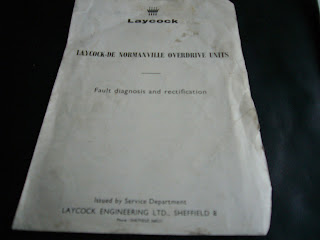 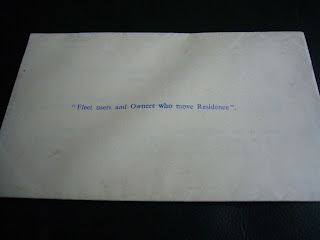 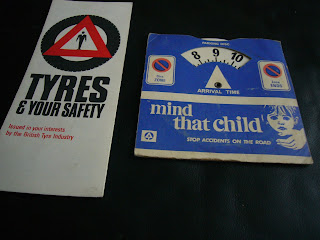 December 2nd. At last I've done something. (But not much!)

Since the ill fated trip to Holland at the start of November I've done very little on the cars.  A combination of a sickness bug and lack of motivation ensured that my 'get up and go' got up and went!
The windscreen wiper issue that developed just outside Dover in the torrential rain turned out to be a knackered wiper motor. Luckily I had a spare, so this was fitted and the wiring was replaced as that had melted too. I now have wipers that self park whereas they never did before, so that's an improvement.
During one of my bored spells I've had a go at making a Mk2 2.5pi rev counter that will look at home in a Mk1. I will have to fit the Mk2 pi speedo as well and relocate the temperature, fuel and voltage gauges, but I wanted to see how it would look first before I go the whole hog. I wanted to keep the chrome bezels that the Mk1 has while using the Mk2 rev counter, so the end result is...... 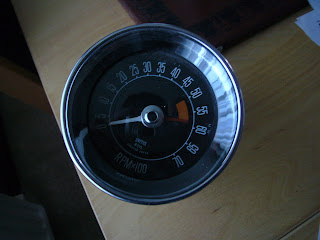 I'm quite happy with it, so the next task will be to do the same to the speedo. I had this in mind for Gertie, but there is a new project on the horizon. I quite fancy getting into the Historic Rallying scene. Not in a big way, just doing the odd events here and there, but Gertie isn't eligible for the class I want to enter. Being 1968 she is too young and also too modified.

The class I want to enter is Category 1 and the car needs to be registered before 1.1.68. It also has to be pretty much to manufacturers specification (mild mods are allowed) and the car has to be  standard in appearance too. Bumpers have to remain in place, and cars can only be one colour unless they left the factory in more than one. (there goes the cream roof and cream wheels trade mark!) You can't display any advertising and can only have certain sized wheels and tyres. You can also only have four forward facing lights, so spotlights are out too. (Unless you fit a big set of spotlights and tape over the standard full beam units like Charles Harrison has!) :)

Luckily, I got to hear of a 1967 Mk1 saloon and so made arrangements to view it. It needs work, but the price was right and it was ideal for what I was looking for. I don't want a mint condition one when there's a mild chance of disappearing through a hedge backwards at high speed at some point!
So hopefully, said car will be delivered one night this week and I'll have something to play with over Christmas. Apart from being robbed of a few parts it's fairly original and according to the dvla website was last on the road in 1989! So it needs a bit of recommissioning then! 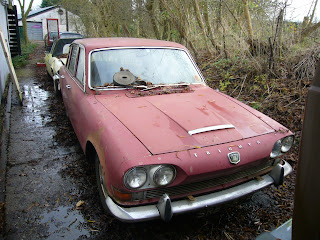 ﻿
﻿
Unfortunately, the purchase of the Mk1 will force the Mk2 estate out of the garage once again and I will probably have to put it up for sale. It's too good a car to be sitting outside in all weathers. You could well be seeing it on the dreaded fleabay very soon! :(
Posted by King Rat Racing at Sunday, December 02, 2012 No comments: