Friday October 4th finally arrived and after loading the car with tools, spares, snacks etc. it was time to make my way to Enfield for the start of the RBRR.
After picking up fellow crew members Dave Maton and Graham Parkins from Cheshunt we filled up with petrol and headed to the Plough to  book in and meet up with the other 105 teams taking part.
The 6pm departure time soon arrived and due to where we had been parked, we were the 101st car to leave out of the 106 starters.
Graham was the first man in the driving seat and we were soon heading up the A10 and made good progress up to Blyth Services for the check point. I jumped out to get the book signed while Dave and Graham pulled straight onto the petrol pumps to fill up. Dave was now driving and we got going straight away, but unfortunately drove straight into a bad traffic jam on the A1 due to an accident. Once past this, we thought we were in for a clear run, but then came across another long delay this time due to roadworks! Finally we got past the hold ups and carried on up the A1 to the A68. Before long we were at the second check point at the Scottish/English border at Carter Bar and were amazed to find that we were the second car to arrive behind Andy and Sarah Johnson in their Triumph Stag. As soon as we crossed the border the rain started and there was lots of surface water laying around making progress slower than normal.
The third check point was Edinburgh Airport and after a quick coffee it was my turn behind the wheel for the 'Graveyard  shift'. From Edinburgh we headed up the A9 to Inverness and it was quite weird looking at the sat nav and seeing that the next roundabout was 110 miles away! Luckily, by now the rain had stopped and we had a good clear run up to Allness for the next check point at Skiach services. Graham then took over for the next stint up to John O Groats and we arrived there at around 7am. We decided to go and do the obligatory photo shoot before going for Breakfast at the Seaview hotel. 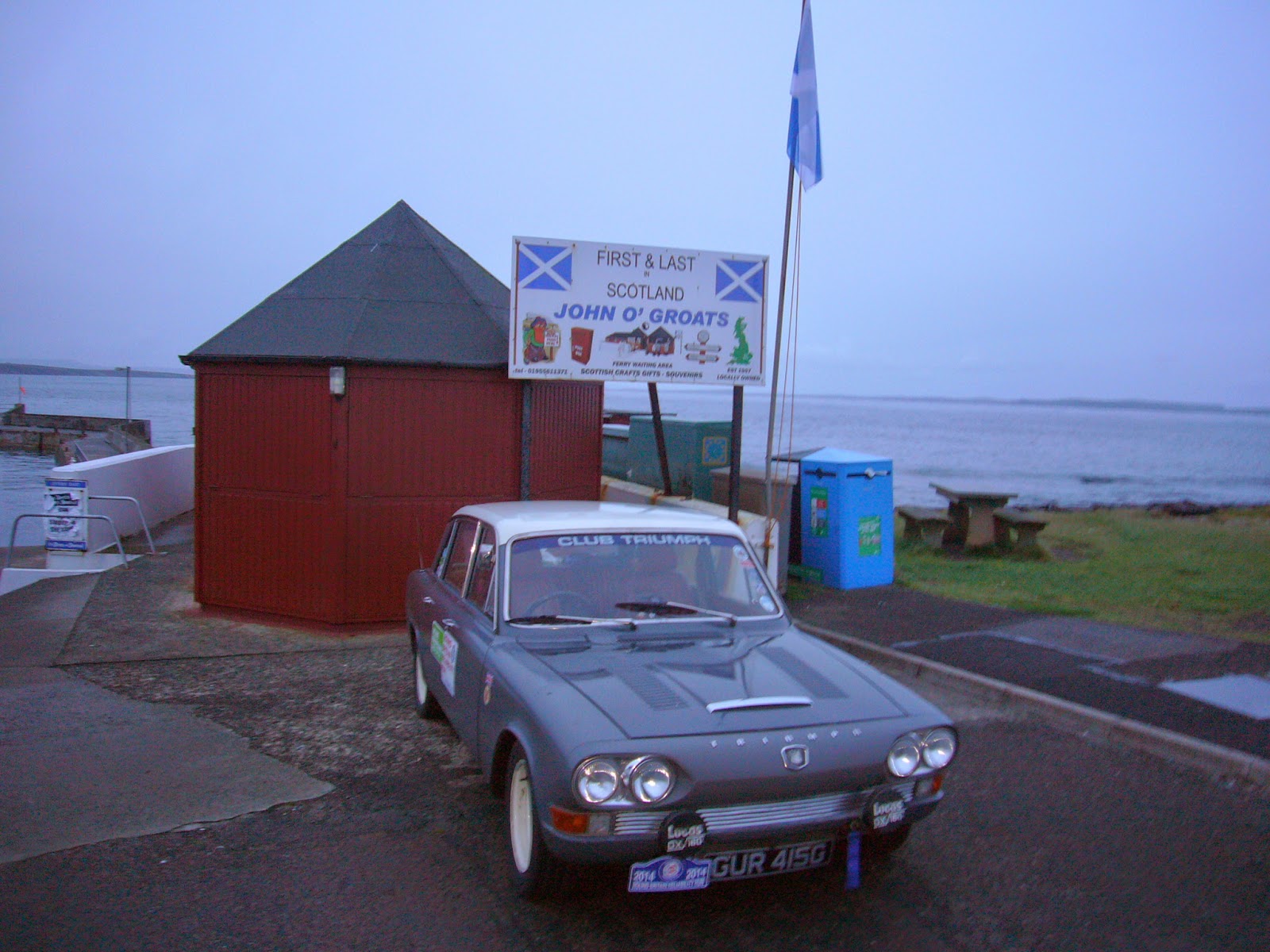 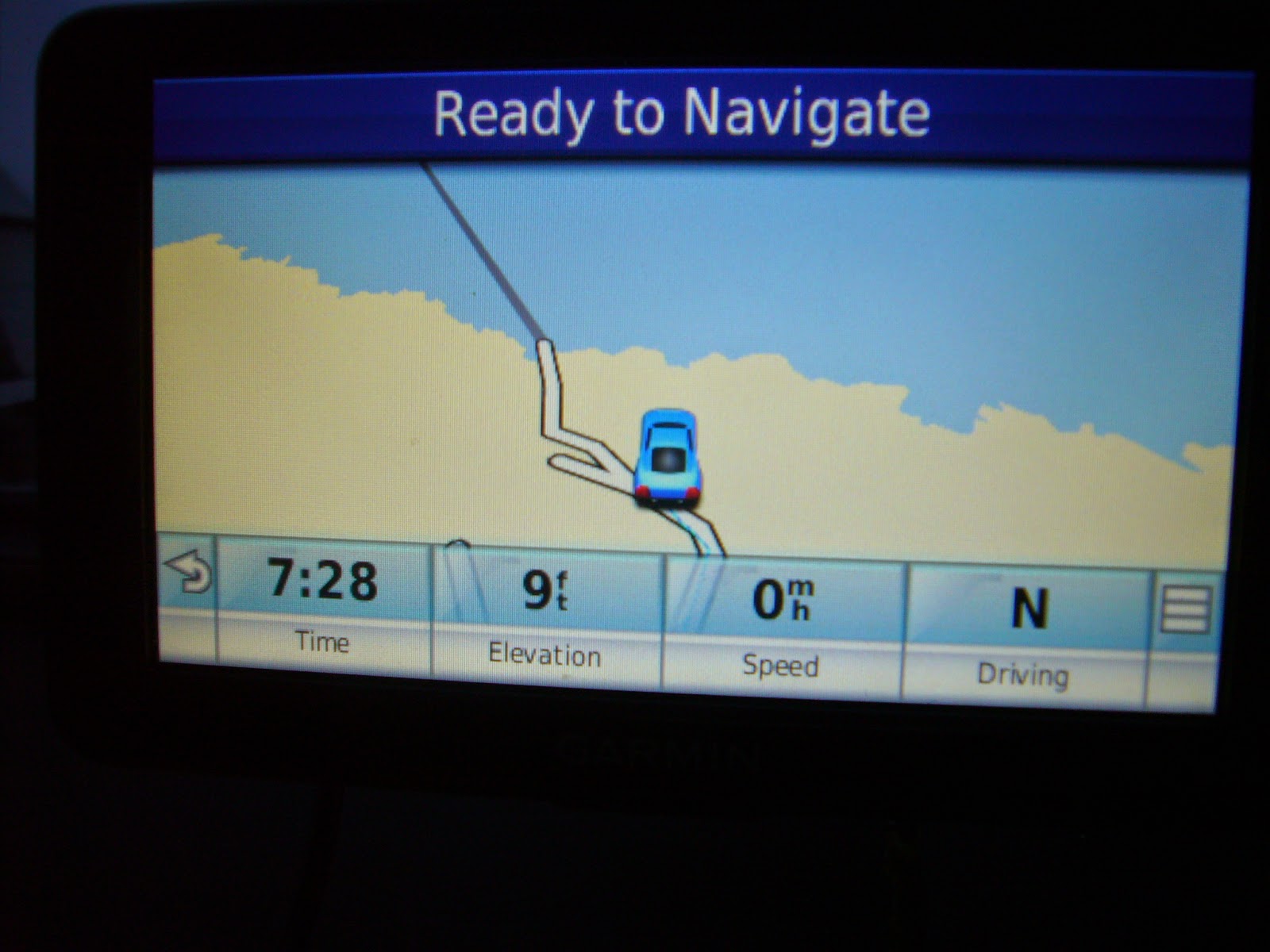 After a good hearty breakfast we headed across the top of Scotland, through Thurso and over to Bettyhill before heading south towards Dingwall. Dave's previous arm injury was causing him considerable pain, so we all decided it was best he didn't do any more driving and rest. After lunch at the Conon Bridge Hotel, I took the driving seat for my favorite part of the run which is down past Loch Ness, Fort William and then through Glencoe. The only drama we had was when the driver's side windscreen wiper fell off! Luckily, it landed on the bonnet and stayed there until we stopped. A quick repair with black electrical tape was the order of the day and we carried on. We arrived at Stirling around 5pm and after another quick coffee at Morrisons garage Dave decided to try and give the driving another go. However, after half hour he was in pain again and handed over the driving to Graham.
We arrived at the next control at Tebay (Cumbria) services early so all of us grabbed a very good hot meal while waiting. With Dave now unable to drive anymore we had now discussed the driving situation and worked out a plan. Graham was happiest with the motorway sections at night while I was ok with country lane bits. So, Graham took the drive down the M6 to the next control at Gledrid in North Wales while I tried to grab some sleep on the back seat in Readiness for my second 'Graveyard Shift' through the Welsh forest sections.
A good crowd turned out to greet us Gledrid and I grabbed a can of Red Bull and a Mars Bar in the hope of them giving me some energy. (and I don't even like Mars Bars!) The drive from Gledrid to Sugar Loaf takes in some beautiful driving roads, but unfortunately for some reason also seems to encourage some ridiculous and dangerous driving from some of the other crews. A few times we were overtaken by other Triumphs on the wrong side of the road on blind bends in the pitch black!
We arrived at Sugar loaf at around half past midnight and as soon as we were allowed, we got the book signed and made tracks for the next  control at Gordano Services on the M5 south of Bristol. By now we were on out second night without proper sleep and we were all getting quite tired. At Gordano services I found the shower open so took advantage. A hot shower and change of clothes had never felt so good!
Graham took the driving seat for the next stage from Bristol down to Lands End, although I took over about 30 miles from Penzance due to tiredness creeping in on him.
We arrived at Lands End to find that the cafe had forgotten we were coming and weren't ready. Not impressed! Eventually we were allowed in and breakfast was served. 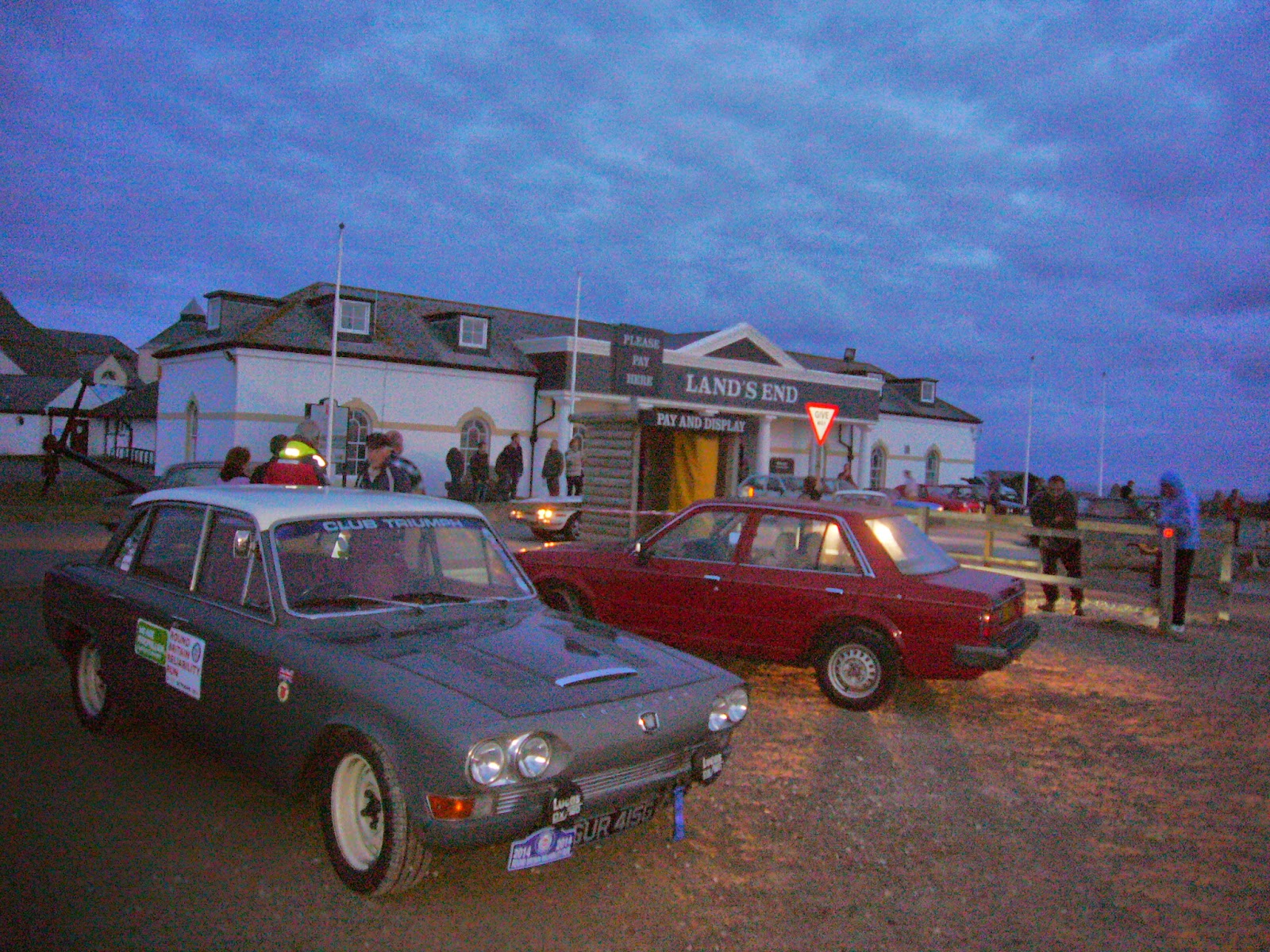 After breakfast I took the drive up to Bude Motor Museum for the next control point. We removed the front wheels and checked the brake pads as we had been getting a squeaking noise when braking, but it turned out to be a loose backing plate. With that rectified Graham took the next drive over to Badgers Holt at Dartmoor.
After a short stop we then headed off for the famous 'cake stop' at Pimperne. By the time we are at this stage, things are a bit more relaxed. Although it's a great event, it's also a nice feeling knowing that you're on the homeward leg and almost at the finish.
With coffee and cakes devoured we set out for the penultimate stop at the TR Register offices at Didcot. Once again we were greeted by friendly faces and hot coffee and after getting the book signed we headed for the Oxford ring road to pick up the M40. It was here that the scares began when Graham suddenly announced that we'd lost the clutch. To be fair the clutch pedal had been getting stiffer since the early hours, but we were praying that it would hold out. I was pretty convinced that it was the seals in the master cylinder giving out. We had a spare seal kit and clutch fluid and a bleed tube, so we could have hopefully repaired it if need be, but how devastating would it be to make Didcot and then not make the final check point if we couldn't?
We managed to pull off the road to investigate and then after some pedal pumping, miraculously, it seemed to right itself. It was still wasn't as it should be, but it was good enough to select all gears and allow us to continue. We encountered quite a bit of 'stop-start' on the motorway but the clutch held firm and after about 90 minutes we arrived at the Plough for the final check point.
It had been a fantastic trip with some beautiful scenery and some good laughs, so a well deserved pint was downed in celebration. Roll on the 2016 event when I'm hoping to use the Mk1 Pi. 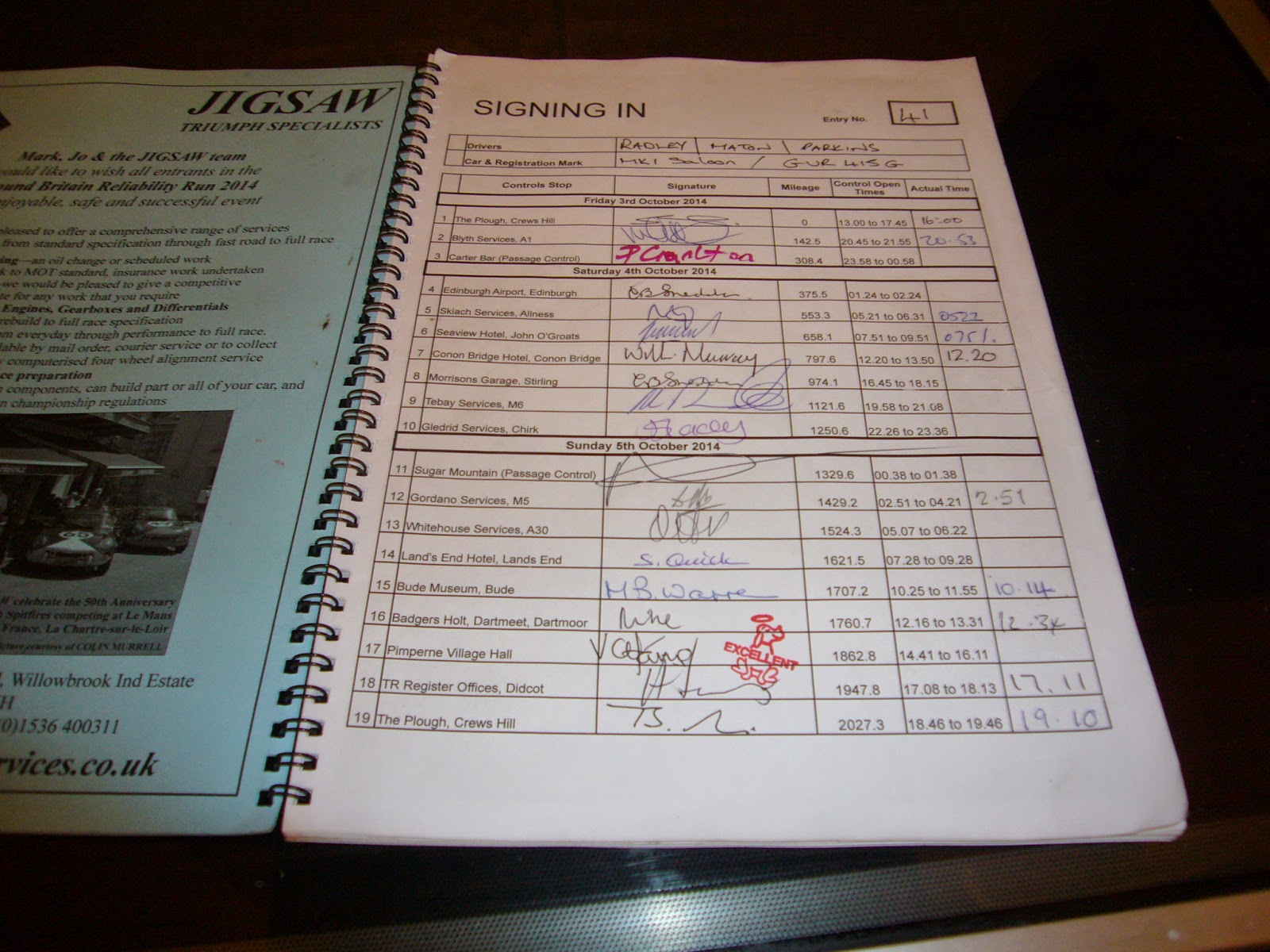