On this bright sunny Saturday afternoon it was time for the Annual Club Triumph Historic Counties Rally. I had decided to rest Gertie my Mk1 saloon 2600 for this event and introduce Flo, my Mk1 saloon 2.5 Pi to some of this endurance type stuff.
I've had a lot of trouble with reliability with this car before, (Purely down to Lucas fuel pumps though,  it has to be said) so it was time to start trying to get it up to Gertie's reliable standard.
Ross, my Co-driver for the event arrived at my house around 2pm and after a quick coffee we set out for the start point in Coventry.
The drive up to Coventry was glorious in the sunshine and the Pi behaved well. We arrived at the start in time to take part in the pre-event quiz and enjoyed some good food before the off at 8pm. 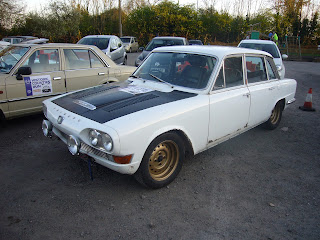 Once the clues had been handed out, we plotted our route which would start us off at the Canley memorial, then take us to Hinkley, then Noble Automotive at Leicester. 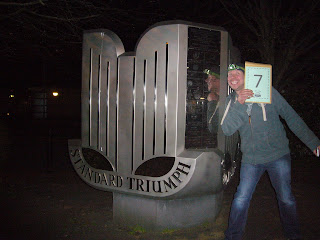 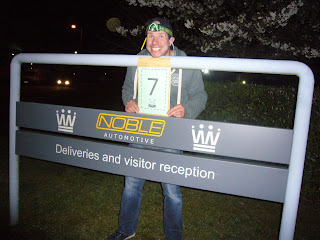 From Leicester we travelled north up the M1 to the county off Nottinghamshire (Bonus point) and then across to Derby to the Toyota Factory. 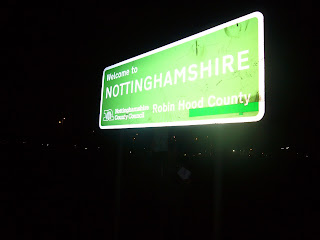 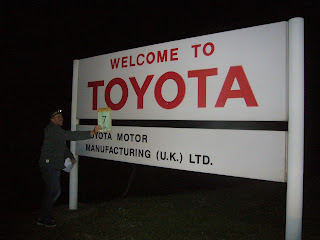 From the Toyota factory we set off across the A50 towards Stoke as our next port of call was the Bentley factory at Crewe in Cheshire. Here we encountered a 'jobsworth' security guard who said we needed permission to take a picture of the factory even though it was on the main road! We just ignored him and took the pic anyway! It was while we were here that we received a text telling us that the halfway point rest break had been moved from a motorway services in the Midlands to a services in Staffordshire due to road closures. We then decided that as this was a lot nearer to where we were, we now had time to get to the Vauxhall plant at Ellesmere Port and back to the services before cut off time. 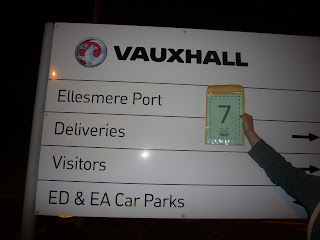 We nearly came unstuck here though, as on our return from Ellesmere Port we found the junction from the M56 to the  M6 southbound closed and faced a lengthy diversion. We also didn't count for the amount of 50mph roadwork sections for such long periods on the M6 and just made the halfway point three minutes before 2am. Arrival past 2am would have put us OTL. (Outside time limit-which meant disqualification from the remainder of the event.)
Once we had had our compulsory break, we set out on the second half at 3am which took us down through Worcestershire, Gloucestershire and into Wiltshire to the Honda factory. Once again roadworks and 50mph speed limits seemed to be the order of the day. Even the M5 was closed between junctions two and three which meant another diversion. 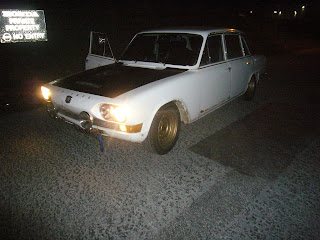 Apparently a lot of other crews had trouble with security at Honda and were told that taking pics was not allowed, but we had managed to find the rear entrance which was unmanned, so we didn't have any grief.
After leaving here we headed south east to McLaren's base in Woking in Surrey. By now the sun was coming up and the tiredness that had been creeping in was dissipating, so that was a good thing. I had started to feel quite knackered! 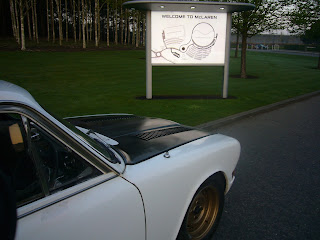 From here time was staring to get a bit tight, so we looped back up towards the M40 so that we could obtain proof of county signs of Oxfordshire and Buckinghamshire before finishing at the required location in Berkshire. (Reading)  Here we had a hearty breakfast before heading homewards on a journey that was fraught with accidents, traffic jams and other serious hold ups! Not what you want when you've been awake all night and just want to get home and sleep!
I was impressed with the Pi though, I have to say. We did 722 miles door to door and she never missed a beat in all that time. (Even sitting stationary for ages in the heat trying to get home) The fuel consumption wasn't bad either with a wallet friendly 27.8 mpg.
The only thing I did miss was power steering. (Gertie has obviously spoilt me!) My shoulders were killing me on Sunday night and Monday morning. A modification for the near future no doubt.
All in all though, a very good trouble free run and faith restored. =) 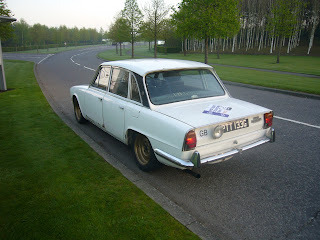