Triumph recovery was the mission planned for this weekend after good friend Dave Harvey had an issue on the Circuit Historique de Laon in France, which unfortunately resulted in accident damage and the car being left undriveable.
The insurance company and the RAC had made it perfectly clear that they weren't interested in helping with the recovery as it was an 'accident' and not a 'breakdown'. Nice!
So, with Ferries booked and arrangements made we left my place at Leigh on Sea at 5.30am Saturday morning to catch the 8.25am Dover to Calais crossing. 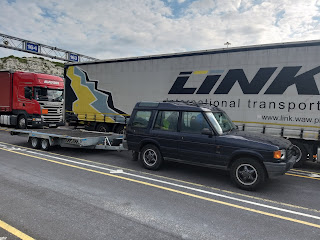 The sailing was on time and the crossing was calm and the restaurant also served a good breakfast which was much needed after the early start. It was a beautiful day weather wise and the traffic was virtually non-existent. (Unlike English roads!) 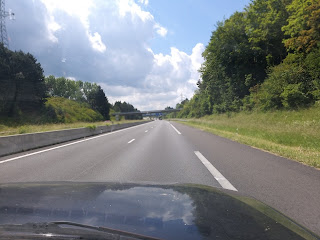 We decided to punch on without stopping and made good time down to Bruyeres-et-Montberault, just south of Laon to where the car was stored. Luckily, although the car was damaged, it could still be carefully driven onto the trailer, (even with a flat tyre where the front wing had pierced it!) so loading the car onto the trailer didn't take long and we were soon on our way again with the intention of trying to catch an earlier ferry. (We'd bought a flexi-ticket for that reason) With just one quick stop for coffee we motored on and achieved our objective by managing to book onto the 5.55pm Calais crossing as opposed to our planned 6.55pm crossing. 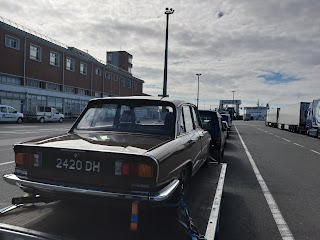 We hadn't eaten since breakfast, so we headed for the restaurant and consumed a rather nice dinner. Again we had another nice calm crossing and the rest on the ferry was most welcoming after all the non-stop driving.
Once we departed at Dover we made the decision to 'go for it' and make the journey up to Dave's place in Derby. That way we wouldn't have another full day the next day, plus we wouldn't have to drag the car and trailer all they way from the M25 and up the A127 to almost Southend and then drag it all the way back down to the M25 again on the Sunday.
With only a fuel stop just outside Dover and a quick stretch of legs (and to check the straps on the trailer) at Toddington services we carried on. The rain, dark clouds, low sun and spray made visibility interesting to say the least!
Apart from the dreaded roadworks between Bedford and Northampton the traffic was free flowing and we arrived at Dave's parents where the car was to be stored at around 10.30pm.
Leaving my house earlier now seemed like a different day, but we were pleased with what we'd accomplished. The Mileage for the day was a tad over 600 miles. After a quick spruce up we then retired to the local pub to celebrate with a couple of well deserved beers. 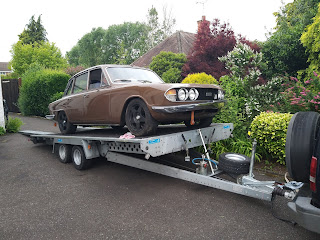 Unloading the Triumph was the first thing on the agenda Sunday morning which didn't take too long and by 10.40am I was on my way home. I had to return the trailer to Latchingdon first though. I eventually got home at 2.40pm with another 191 miles on the clock, so total mileage for weekend was 791.
Once again the Land Rover had done me proud and she's doing well for a 22 year old. It was also satisfying to help a good friend in trouble and make sure that his car wasn't stranded on foreign shores due to the appalling attitudes of the insurance company and RAC's 'European Breakdown cover!
Nethertheless, we still managed to have a good, if not tiring and long weekend.